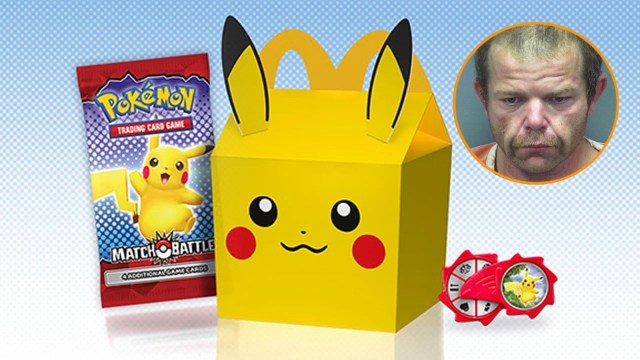 Since they arrived in McDonald’s stores around the globe, the latest Pokémon TCG collaboration cards have been all the rage, but one individual channeled their inner Team Rocket to make some extra cash from the promotion.

According to a report from The Gila Herald, a local Arizona publication, a 32-year-old man was arrested on Aug. 14 and charged with theft, and trafficking stolen property after a roadside stop found that he had been in possession of boxes of Mcdonald’s promotion cards.

The Gila Herald cites a report from Pima Police that details the alleged situation that led to the arrest.  The statement says that the individual was pulled over for a traffic stop and after he was unable to produce his license his vehicle was searched.

Police found a box will multiple packages of Pokémon cards stamped with the McDonald’s logo and questioned the individual about how they got into his possession. The 32-year-old said that he had purchased them with plans to sell some to “his buddy”, but after contacting the Mcdonald’s where the individual was employed, they were discovered to be missing.

Each time that McDonald’s has run a collaboration with The Pokémon Company to produce new TCG cards they have not only been extremely popular but also fetch quite the price on the resale market with some individual cards worth up to $8 each.

As the popularity of Pokémon TCG shows no signs of slowing down it’s likely we’ll continue to see more criminal activity related to the items in the coming years.