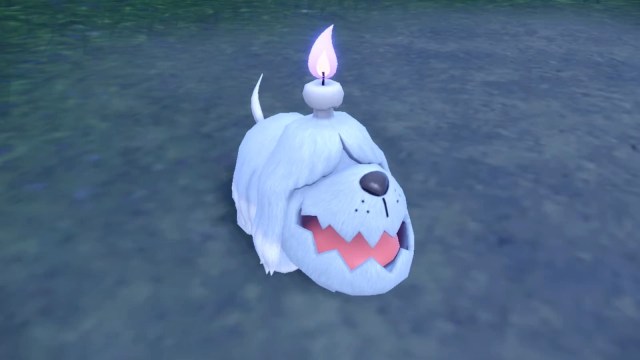 The newest entries in the Pokémon franchise are nearly here, with Pokémon Scarlet and Pokémon Violet set to release on Nov. 18, 2022. In the lead-up to their release, The Pokémon Company and Nintendo have slowly been teasing us with brand-new Pokémon that will be available to catch in the Paldea region, the new region which will be introduced in the new titles.

As usual, the new Pokémon have been impressing fans, and their next reveal has been no different. They recently announced a new Pokémon called Greavard, who is a Ghost-type dog Pokémon, but as it is a Ghost-type, Greavard’s story is a little haunting. So let’s take a look at this new Pokémon, and see what exactly the Pokémon is all about.

Who is Greavard, the new Ghost-type Pokémon?

The new Pokémon was first revealed in this fun video parodying a ghost-hunter series but set in the world of Pokémon. The new Pokémon Greavard is a small Ghost-type dog Pokémon that has a candle on the top of his head. He is a white-gray color while the candle is purple, almost like the Pokémon Litwick. And one thing is for sure, this Pokémon is incredibly cute.

However, Greavard has a dark secret. Whenever they are around other beings they slowly sap their life force away from them. The curse to be around this cute little dog will be to slowly die. This is not the first time a Pokémon’s lore has gotten dark, with Cubone wearing the skull of its mother, for one example. But whether or not Greavard’s curse will impact the gameplay of Pokémon Scarlet and Pokémon Violet might not be revealed until the release of the games. One user is happy to see that the games’ descriptions of their Pokémon have not changed since the days of Cubone, tweeting “Good to see the tradition of unnerving Pokémon descriptions is still alive and well.”

The Pokémon Twitter account has been sharing content with the little dog since he was revealed, with him zooming around and presenting himself as a nice pet. Most fans have been obsessed with how adorable Greavard is, with a few of them taking to social media to express how they would die for a chance to pet the dog. One fan tweeted, “You’re acting like I WOULDN’T gladly give up my soul to play with this good boy for hours upon end. Only COWARDS wouldn’t!! PLAY WITH THE DOGGO!!!”

Of course, you can learn more about Greavard, catch him, and train him when Pokémon Scarlet and Pokémon Violet are finally released on Nov. 18, 2022.