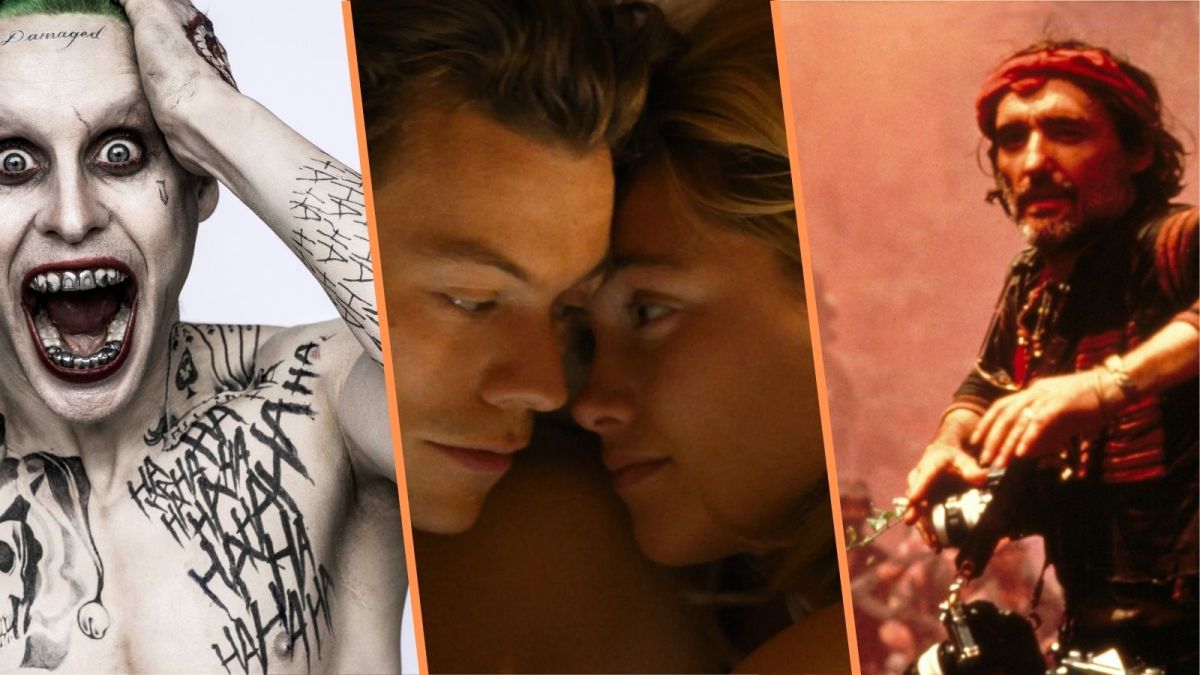 Moviemaking and Hollywood is filled with big budgets, big stars, and bigger egos. The creative process itself can be such a difficult one, so it’s no surprise some films end up with major feuds on set.

Such drama can be traced all the way back to cinema’s greatest triumph in Citizen Kane, with the drama between Orson Welles and co-writer Herman J. Mankiewicz in the late 1930s. Here are ten cases of huge drama on the sets of cinema, in no particular order.

Everyone’s dad’s favorite movie that isn’t The Shawshank Redemption is Apocalypse Now. By all accounts an absolute nightmare to film, and caused some truly horrific events behind the scenes. If you ever thought filming a movie in a jungle was a good idea, think again. Francis Ford Coppola’s war film saw dramatic circumstances, as star Martin Sheen had several panic attacks and even a heart attack thanks to the grueling nature of trying to get the film shot.

Similarly, Marlon Brando arrived on set having not read any of his lines and needed Coppola to dictate to him his lines. So notorious for its troubles, a documentary titled Hearts of Darkness: A Filmmaker’s Apocalypse was made about its production.

A slight twist on the classic Stepford Wives story shouldn’t be host to many real-life feuds between A-list stars, but here we are. Director Olivia Wilde and star Florence Pugh had a troubled relationship as the film was shot, with ex-star Shia LaBeouf later leaking that Wilde had given Pugh a condescending nickname during its production.

After LaBeouf was replaced by Harry Styles, the Pugh issues worsened. LaBeouf leaked to the press that Wilde tried desperately to keep him on the film, and made several remarks over Pugh not giving her full effort on the film, dubbing her “Miss Flo”.

Fast-forward to its premiere at Venice Film Festival, it all starts falling apart more. Pugh mysteriously couldn’t arrive in Italy in time for the press conference and was always seen anywhere but next to Wilde. Then there’s the JFK-like internet investigation into a clip that seems to show Styles spitting at his co-star Chris Pine as they take a seat for the screening. The press conference for the film was still a mess, as Wilde tried hard to deflect from the very public allegations.

Pugh and Wilde’s stylists even got in on the action, as the film’s premiere went down in history as a disaster for PR teams.

After the success of Spider-Man’s big cinematic debut in 2002, it all seemed to be working up nicely to a sequel helmed again by Sam Raimi. The Evil Dead trilogy director committed the films to a campy atmosphere with Tobey Maguire at its heart. As pre-production ended and the film got closer to filming, Maguire picked up a horrific back injury which threw the project into doubt.

Speculation has it that while Maguire did have a back injury, it could’ve been down to a pay dispute with the actor wanting more money to headline the film after the first film’s successes. It got very close, with Jake Gyllenhaal believed to have been ready to take on the role. It all worked out in the end, as Spider-Man 2 was released on time in 2004 and to critical acclaim.

James Cameron’s fascination with water and the depths of the oceans was first kindled during his seminal film Titanic. So serious about accuracy and being able to make it as practical as possible, Cameron spent millions recreating the ship which measured up to 750ft long.

With a 17 million gallon water tank and frankly far too much attention to detail, further problems arose as cast members suffered a PCP overdose thanks to the work of two chefs. Yes, angel dust was distributed into the food and water of the cast and crew.

It can at least look back and know it was worth it, with it one of the highest-grossing films of all time.

Cinema has always been filled with auteurs, and just as often with those who think they are auteurs. The next legendary filmmaker could come from absolutely anywhere. But it certainly didn’t come with Tommy Wiseau’s The Room. Notorious now as a “so bad it’s good” movie, it’s hard to truly understand the psyche of Wiseau.

The mysterious nature of Wiseau puts a fog over the entire production. Twenty years on, nobody is still certain how he got the funding. The filming itself, though, was even stranger. Filled with crew members forced into roles, tough working conditions, and a delusional leading man it became a clear wreck. Wiseau’s role as the actor, director, writer, and producer was unorthodox and makes it even more impressive that he continuously forgot his lines.

It’s an absolute cult favorite now, and while it’s not the type of success Wiseau envisioned, it’s still a form of success.

2016’s cinematic release of Suicide Squad was vastly different from its original cuts, with plenty of studio interference. That alone could make an entry, but it’s the behavior of one of its stars that earns it a spot.

Jared Leto’s casting as The Joker seemed like a solid choice with the actor known for his bizarre and wacky character acting methods. Leto would be the first actor to take on the role after Heath Ledger’s tragic passing in 2008, and expectations were high for his version.

The first look was not particularly good news for many fans, with this version a tattoo-addled SoundCloud gangster. Then there are Leto’s actions on set. The actor himself has said he sent bullets, dead rats, and used condoms to his castmates. Frankly, this is not behavior that is OK in any workplace.

Leto tried to deny this in the years after, but unfortunately, he was the one who started this narrative. Nice work Jared.

Marlon Brando’s back! With more madness! One of history’s great behind-the-scenes nightmares came while filming an adaptation of H.G. Wells’ classic The Island of Doctor Moreau. Going through two directors and a monstrous filming experience, it all comes from a tragic place.

Brando and Val Kilmer’s on-set antics led to original director Richard Stanley leaving the project and hiding in the jungle as a hermit, then returning as an extra for the second director as revealed in the documentary Lost Soul: The Doomed Journey of Richard Stanley’s Island of Dr. Moreau.

Brando struggled in the film with his daughter’s recent suicide causing the actor distress and resulting in him having his lines either ad-libbed or fed to him via an earpiece. Brando was the lesser problem though, with the documentary and Kilmer himself, revealing how he was a big problem.

Kilmer was insubordinate and undermined Stanley, which was the key factor to his leaving the project. The film eventually finished production with John Frankenheimer serving as director. The legacy of Dr. Moreau as a madhouse film remains, with Kilmer sharing his side of the story in 2021.

Blade II was a surprise success, with Guillermo del Toro’s take on the vampire hunter a shock hit for studio New Line Cinema. After grossing $155 million from a budget of $55 million, the studio was quick to fire ahead with a threequel. What could go wrong?

Blade: Trinity ended up being a disaster, punctuated by star Wesley Snipes being unbelievably off his head according to Patton Oswalt. Snipes would not respond to anything but “Blade”, and was smoking marijuana heavily during the filming process. Snipes would later only communicate with post-it notes, further descending into madness. Speaking to Pete Holmes on the film’s production Oswalt said it’s better than Citizen Kane if audiences knew what they went through to make it.

“If you just sit and watch Blade: Trinity, it’s a D-, it just doesn’t work, but if you know what they went through to get that movie made, it is an A+ — the fact that the movie exists puts it above Citizen Kane“.

Far more interesting than The Hobbit trilogy itself is how hard it was to even make. Guillermo del Toro’s departure from the films just months before filming was meant to commence was just the tip of the iceberg.

Throw in industrial and union strikes in New Zealand, an increasing studio desire to stretch what was originally two movies into three, and a director doing 20-hour days, it’s astonishing it was even released. Peter Jackson was thrown back into Middle-earth, and after the nightmare the production had become, it was going to be a five-year journey.

Eventually ending with The Hobbit: The Battle of the Five Armies, Middle-earth remained untouched for a while. The union dispute with Warner Bros. became more mainstream thanks to video essayist Lindsay Ellis who spoke to several actors involved in the trilogy.

Trying to work out how on earth Fant4stic ended up like it did could require a Baghdad House of Wisdoms. Fox’s last-ditch attempt at keeping the rights to the Fantastic Four characters resulted in one of the most critically-panned films of the 21st century.

It all starts, as it so often does in these cases, with studio intervention and disagreement with directors. Josh Trank’s original vision for Marvel’s first family was meant to be a mix of Sam Raimi and David Cronenberg with horror to meet superhero melodrama. A *ahem* fantastic idea on paper, but after plot details and casting got leaked online the studio was not 100 percent sure.

By the time the film had begun filming it’s alleged Trank was showing up drunk on set and picked a fight with Miles Teller (a casting he fought to get), and Trank eventually got locked out of the editing bay. Years later, Trank left a Letterboxd review of the film and spoke of how he was in a “heavily fucking traumatized” state of mind the last time he’d seen any of it.