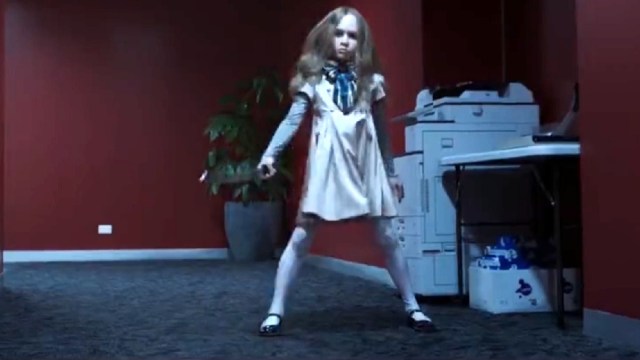 On Oct. 11, Universal Pictures released a trailer for the upcoming horror movie M3GAN, which features the scariest anthropomorphic murderous doll since the original Chucky.

M3GAN follows the story of eight-year-old Cady (Jenna Davis) who moves in with her aunt Gemma (Allison Williams) after her parents die. Gemma thinks it would be a good idea to introduce her to M3GAN, a “model-3 generative android.”

The whole point is to make Cady happier, and at first it works. Until M3gan starts murdering people, of course. The real draw here is the doll. It moves like a person; it dances; it gets mad when you try to turn it off and it will do “anything” to protect Cady.

The trailer for M3GAN has been such a smash that memes immediately started popping up all over the place. Here are 10 really good ones.

One of the more unsettling things in the trailer is when M3gan dances – something that’s so human looking it’s somehow terrifying, but slightly less terrifying when it’s Charli XCX.

Honestly this is genius. Who has the time to do these things? Not that we’re complaining.

Of course a movie about a doll, animatronic or not, is going to get comparisons to a different murderous doll named Annabelle, of the Annabelle franchise. What really takes this meme over the top is the beautiful addition of peak Demi Lovato.

Everyone’s favorite twerking rapper Megan Thee Stallion couldn’t help but get in on the fun.

There’s just something about celebratory dancing.

6. The real life Megans are concerned

Is this going to ruin the name Megan the same way Disney ruined Star Wars movies?

I bet you didn’t think a killer AI doll and the classic mobster movie Goodfellas didn’t have anything in common. Well they don’t, but this meme is hilarious regardless, and a good reminder of how good of a dancer Ray Liotta was. Rest in peace sweet prince.

There’s a lot of these floating around and they are incredible.

Does anyone remember Bella and Edward’s vampire kid Renesmee from the Twilight movies? Remember how weird she looked? People are having fun with that too.

I know we’re all still mourning the loss of The Wendy Williams Show, but at least we can all revel in the fact that Williams is still making meme appearances.

We can all see if M3GAN lives up to the hype when it dances its way into theaters on Jan. 13 of 2023. Long live Queen M3GAN!