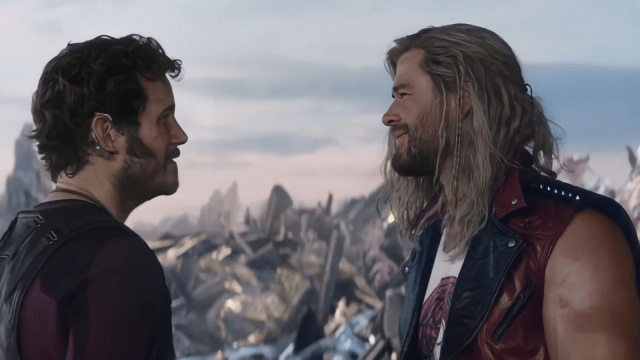 Thor: Love and Thunder is finally out in theaters, marking the return of Chris Hemsworth as the Asgardian god for the first time since 2019’s Avengers: Endgame. Likewise, the Guardians of the Galaxy are also back after three years, too, albeit in a much smaller capacity. But for those feeling hungry for more Star-Lord/Thor content after catching Love and Thunder on the big screen, Peter Quill himself Chris Pratt has you covered.

The Jurassic World Dominion star has taken to Instagram to share what can only be described as a bromantic behind-the-scenes pic of himself hanging around with Hemsworth on set of Taika Waititi’s movie. Pratt took a moment to praise his Australian co-star and the film’s crew in his caption.

“Nobody on Earth is more right for Thor than this man,” Pratt wrote. “What a stud. What a star. What a movie!!! Forever grateful. Thanks to Taika for including us! Thanks to everyone in Australia who took such good care of us. Sprint to the theaters and see what everyone is calling the best Thor yet!!!”

Check out the snap of half of Hollywood’s Chris quartet via the post below:

A couple of Pratt’s Dominion co-stars shared the love in the comments. DeWanda Wise quipped “*Faints from handsomeness,” while Sam Neill — who’s a veteran of the Thor-verse himself — concurred with Pratt’s praise. “You so right!” he replied.

While it’s too soon to say where Hemsworth will feature next as Thor, we know exactly where Pratt will pop up next as Star-Lord. Quill and his team return in this December’s The Guardians of the Galaxy Holiday Special, with Guardians of the Galaxy Vol. 3 following in theaters next May. Seeing as that will conclude the gang’s journey, however, that might well be the last time we see Pratt in the MCU.

In the meantime, if you haven’t already, go see Thor: Love and Thunder in cinemas now. Though, be warned, Pratt might be stretching the truth when he calls it the best Thor movie.