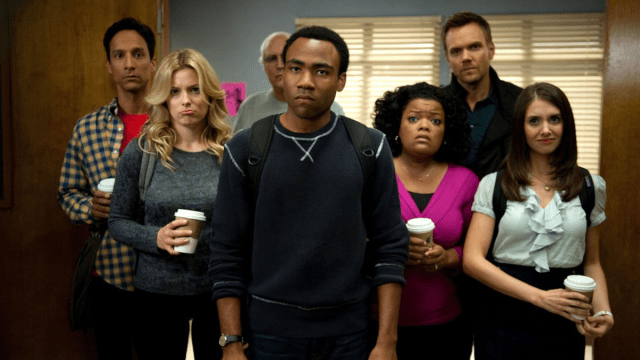 Loyal Community fans have been teased over and over about a movie that might one day be made. “Six seasons and a movie” was first a funny line in one of the early episodes of the show. After the sixth season 2015 finale, Danny Pudi dropped a hint in 2017 that it could still happen, Alison Brie speculated about it in 2019, and Joel McHale said much more than anyone else about it in 2020.

When he was asked, Joel McHale said that it was “highly likely.” If there’s anyone who would know, it’s the guy who hosted The Soup before landing his big college role. But is it really going to happen? Are all the speculations over? According to Variety, it’s no longer a rumor. You can rest at night knowing that it has been confirmed and here’s how we know:

After that tweet erupted, Joel McHale and Ken Jeong both followed with their own tweets. That’s more than enough evidence to make you quit wishing for it and start looking forward to it. But now, there’s one lingering question that everyone has on their minds.

Who will return for the Community movie?

If you recall, the students who served six years together in a community college were Jeff Winger, Abed Nadir, Troy Barnes, Annie Edison, Britta Perry, Shirley Bennett, and Pierce Hawthorne. Not to mention, Dean Craig Pelton and Ben Chang were big parts of the original cast as well. Fans would hope to see them all. But for some characters who were on the show, their return would be nearly impossible. So, here’s a good idea of what might happen.

Jeff started off at Greendale as a man who had practiced law until it was found out that his academic credentials were not legitimate. With his license to practice law suspended until he earned an actual law degree, Jeff was a “too cool for school” student who was not into the community college scene. But he grew to appreciate the study group and little by little, he was turned into a guy who actually cared. The last anyone saw, he was a professor of law at Greendale and that’s most likely what he’ll be in the movie.

Shirley came to Greendale focused, knowing exactly what she wanted to be. She took business classes because she liked to cook and she wanted to make a business out of it. Eventually, Pierce would be her partner and she did open a sandwich shop on campus. But Shirley had her ups and downs with her business and her family, so she stuck to learning more about business to give it another try. Eventually, she reopened the sandwich shop on campus and that’s probably where she’ll be.

Abed was a particularly interesting character with a strong interest in filmmaking. But his genius level IQ made it hard for him to relate to people with average intelligence. That is except for Troy Barnes who became his best friend. When the final season of Community wrapped, Abed had accepted a job in California where he was asked to work on a television show. He’s probably some big time filmmaker now and his return to Greendale will be a special one marked with accolades and plenty of bragging.

It’s hard to tell if Troy will be back for the reunion. The last anyone saw, he was setting sail with LeVar Burton to win Pierce’s fortune. Things could have gone easy for them, but the news reported that he and LeVar had run into pirates out there on the high seas and they were hostages. The thing about that kind of twist, it’s really hard to survive a pirate hostage situation unless he was able to talk them into helping him finish the journey and collect the booty.

Annie was a nice girl who followed Troy to Greendale. She graduated after four years and was hired by a pharmaceutical company. But she had a change of heart about her career path and came back to Greendale to pursue a forensics degree. She did very well with that and was invited by the FBI for an internship. If all went well, she’s an agent now and that’s a far cry from the girl who began school at the community college.

Britta had some real-world experience when she started attending Greendale. She had traveled the world and was a foot model at one time. She also liked to join activist groups but would either get kicked out or they would disband. She finally decided to work toward a psychology degree at the community college and she was doing fine for a while. She eventually left to work as a bartender but got a second wind, and came back to finish her degree. Hopefully, she’s doing something with that.

Pierce Hawthorne was one character who did the most changing at Greendale. He didn’t need a degree since he already had a fortune and he was retirement age. But the community college and the study group more specifically changed him from a messed-up elder to the guy who built the Gender Sensitivity and Sexual Potency museum at the college. Sadly, he passed away shortly after graduating. So, don’t expect him to show up.

But you might look forward to the crazy antics of Dean Craig Pelton and Ben Chang. What would the movie be without them? Dean Craig had no idea how to be a good dean and Ben Chang was everything from a Spanish teacher who also falsified his credentials to a security guard who tried to take over the school. He also worked with Shirley in the sandwich shop and after going to jail, he was given work release to come back to Greendale and teach math. What will they come up with next?

That’s the best part about a Community movie. No one knows what it’s actually going to be. But fans know they’re going to love it and they’ll be able to watch it on Peacock.