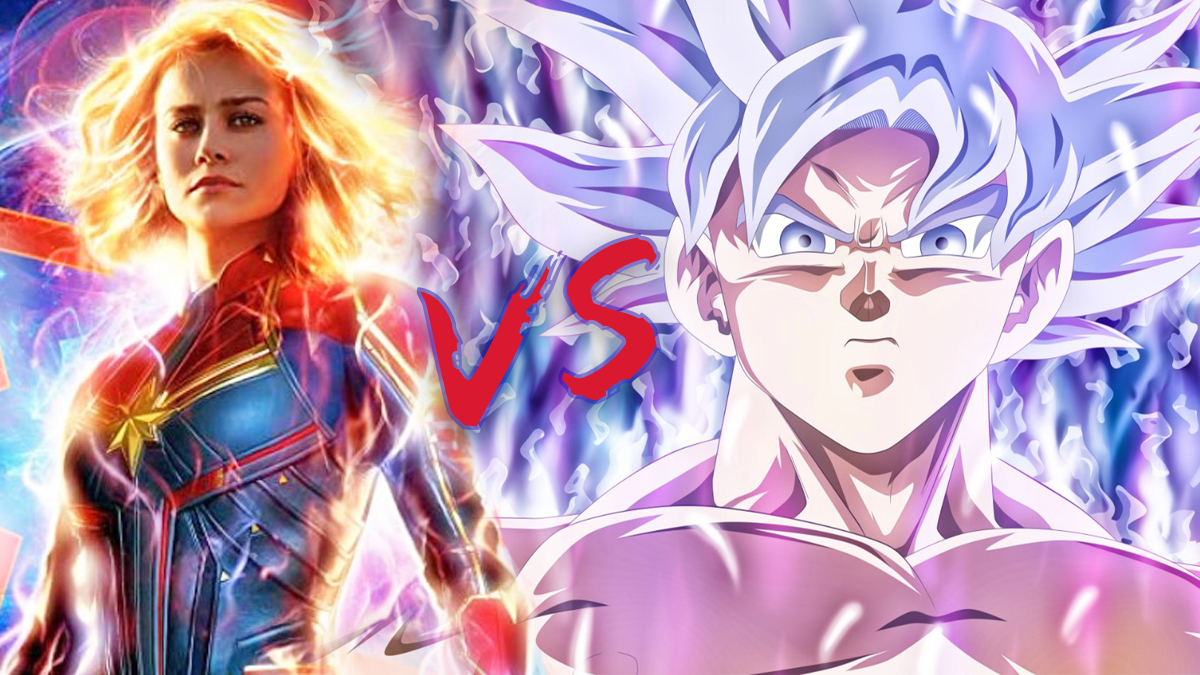 Images via Marvel Studios and Toei Animation/Graphic by Brandy Cruz

Comic book and anime fans often wonder who would win a fight against their favorite heroes if they were to combine universes for an epic battle. While it’s exciting to pit superheroes in the same universe against one another, matching heroes from different universes against one another is even better. In the right company, that kind of discussion could lead to World War III.

Some of the most heated debates surround Dragon Ball’s Goku vs the Man of Steel, Batman vs L from Death Note, or even Merlin from Seven Deadly Sins vs Scarlet Witch. The debate between two superpowered heroes can get pretty heated, with fans on both sides making excellent arguments for their favorite. The latest query surrounds Goku vs. Brie Larson’s Captain Marvel.

Who would win in a battle?

Captain Marvel made her debut in the Marvel Cinematic Universe in 2019. Carol Danvers was a human who was exposed to the Space Stone housed inside the Tesseract. After waking with amnesia, her DNA was altered after receiving a blood transfusion from the Kree during the events of the Captain Marvel film.

Captain Marvel’s abilities include super speed and super strength, among others. She can also produce photon blasts from her hands. In her powered-up state, her strength, durability and energy blasts are even more powerful. Her base power level was on-par with Yon-Rogg (Jude Law). During the events of Avengers: Endgame, she held her own against Thanos (Josh Brolin), who only faced real competition against Wanda Maximoff (Elizabeth Olsen) up to that point. While Captain Marvel is powerful, there is plenty of debate about whether or not she’s even the strongest Avenger, let alone the most powerful superhero in the MCU.

In comparison, Goku is, without a doubt, the strongest character in anime. He is anime’s answer to Superman—an alien sent to Earth as a baby with enough power to destroy all life on the planet. Lucky for us, they both became Earth’s protector, and Goku has saved the human race from certain destruction more times than he can probably count.

Goku’s abilities are immense, starting with super speed and super strength, like Captain Marvel. However, Goku can move faster than the human eye can detect, even at his base form. His many powers include the kaioken attack, spirit bomb and his famous kamehameha, which is strong enough to destroy a planet. Throughout the years, Goku has gone through many transformations—each of them stronger than the one before—and his latest transformation into Ultra Instinct form makes him closer to a god than mortal.

Therefore, without any doubt, Goku would destroy Captain Marvel in combat. In fact, as powerful as all the Z Fighters are, Captain Marvel might only be able to beat Yamcha.