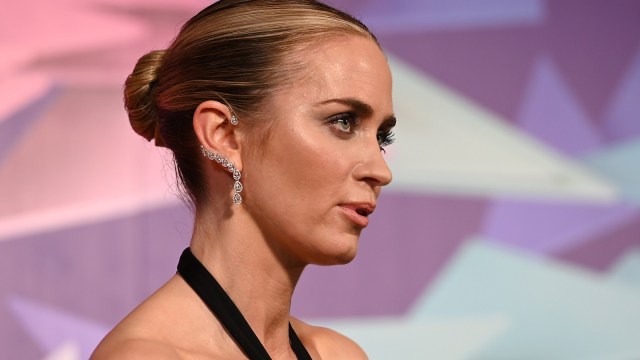 We’d love to know if there were any disagreements at home when John Krasinski signed on to make a cameo appearance as Reed Richards in Doctor Strange in the Multiverse of Madness, because his wife Emily Blunt would have been all too aware that her spouse’s surprise guest spot would lead to increased speculation about her own potential involvement in the Fantastic Four reboot.

It’s a line of inquiry the actress has been facing for years, and it’s become very clear that she’s unwillingly resigned herself to the fact she can’t go anywhere to promote anything without the Sue Storm subject being broached. As chance would have it, Blunt is on the press trail for Western series The English, and wouldn’t you know, the MCU question reared its head yet again.

In an interview with Extra, and quite possibly through gritted teeth, the Edge of Tomorrow and Jungle Cruise alum addressed the Fantastic Four elephant that follows her into every room with another non-committal answer to the question she knew was coming.

“Well, I know nothing! I never know how to answer these questions…No one has approached me about the Invisible Woman so we’ll just leave it as that. I’m always very touched by the fan casting. I think that’s cool.”

Fans may have been disappointed that both Comic-Con and D23 came and went without a casting announcement regarding WandaVision director Matt Shakman’s Fantastic Four, but you can guarantee nobody’s going to be happier than Blunt when the identity of the MCU’s Sue Storm is revealed to the world at long last, whether it’s her or not.