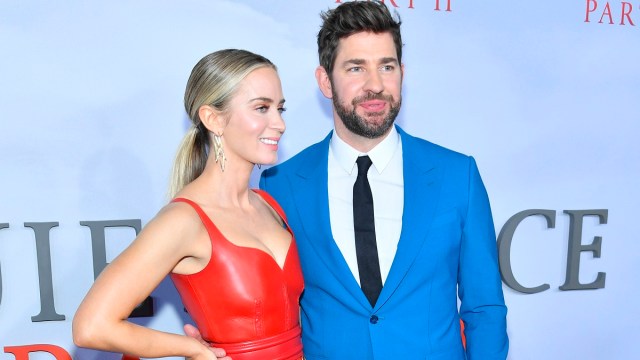 It must be very hard sometimes for actors who in are some way involved with the Marvel Cinematic Universe to keep up their enthusiasm at all times. Much like how Disney’s child actors had to maintain a certain image of peppiness, so too must actors working in Marvel, but what about their spouses and partners? How do they feel about the constant attention the MCU brings with it? Well, one such partner of an MCU star looks like she is getting pretty fed up with the constant questioning.

John Krasinski joined the MCU in the role of Earth-838’s Reed Richards, a.k.a Mr. Fantastic. He had been a fan favorite casting for some time before and many were delighted with his, albeit short-lived, appearance. Now the rumor mills won stop churning regarding whether or not he will return to the role in the upcoming Fantastic Four film, now slated for 2025. Krasinski’s wife, Emily Blunt, seems to be getting tired of reporters asking her about her husband’s involvement with the franchise, as a video from the premiere of her own show, The English, shows.

Though the interviewer states he won’t ask about Marvel, to which Blunt seems to look grateful for, he does so anyway. You can see the actress visibly deflate a little as the subject of her husband’s Marvel career comes up, though she quickly straightens herself up and smiles as she gives the usual, “you never know” answer that everyone within Marvel’s mega-sphere must be forced to rehearse. Along with Krasinski playing Mr. Fantastic, fans would love to see the real-life couple play Marvel’s most beloved superhero couple on-screen, with Blunt in the role of Sue Storm, a.k.a Invisible Woman.

She does state she is “really happy” for her partner and understands how people can be so ardent about the cinematic giant that is the MCU, but still, the event for her own premiere of a totally unrelated series is probably not the best place to ask an actor about her husband’s work. Blunt stars in the BBC/Amazon Prime series as Cornelia Locke, an Englishwoman in an Old Western-style show that sees her seeking revenge for the loss of her son with the help of Pawnee tribe member, Eli Whipp.

The first episode of The English airs on Nov. 11.