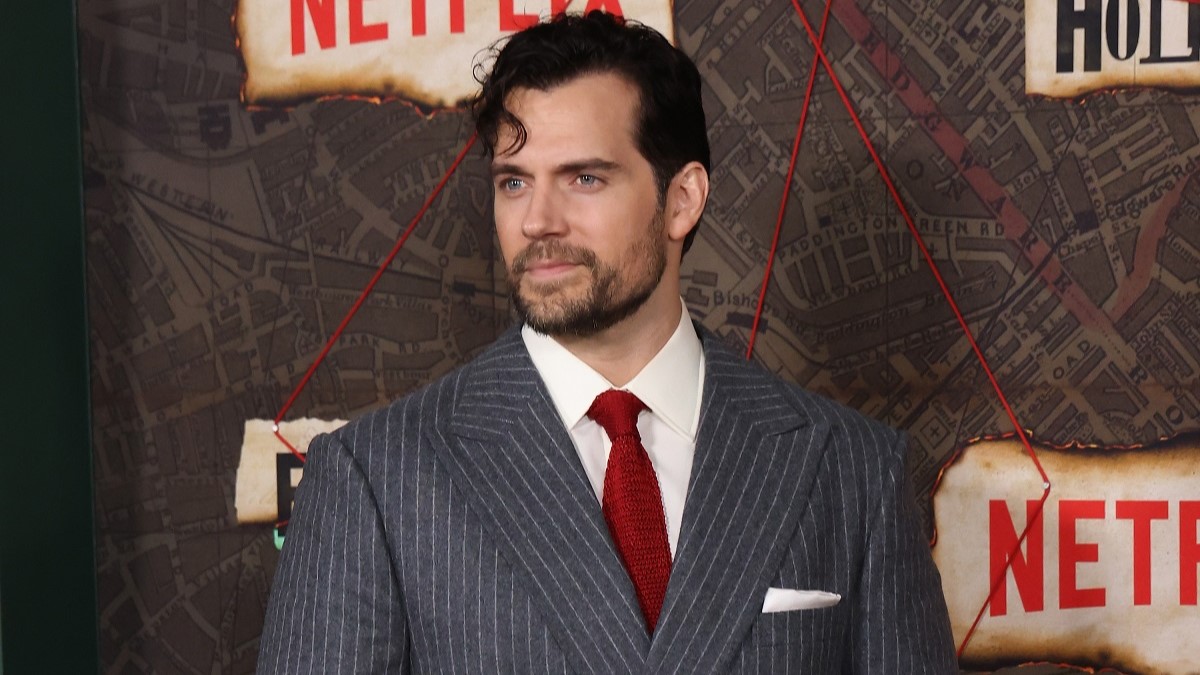 When the world knows you as Superman, it’s hard for an audience to accept you as anything else. Despite his numerous acting credits, Christopher Reeve will forever and always be remembered as the blueprint for a live-action Man of Steel. For better or worse, he could not shake the perception that he truly was Superman on and off the screen. Henry Cavill can sympathize.

As perfect as Cavill was for the Superman role, we tend to forget that he is an actor, not actually Clark Kent. He will move on to other parts, and he’s already gearing up for a Warhammer 40,000 Amazon Prime adaptation. While fans loved him as Geralt of Rivia, they’re ready to see him reenter the superhero game. The trouble will be leaving behind that famous red cape.

On the MCU front, many fans automatically have cast the British actor in the role of Brian Braddock, aka Captain Britain. That may be too close to Superman for his liking, especially if Cavill is looking to make fans forget about his time under the DC banner. That’s why he should join the X-Men, and I have just the parts for him.

Let’s kick things off with an obscure, underappreciated addition to the X-Men’s corner of the Marvel Universe. Also known by his codename, Weapon X, Kane fits squarely into the Wolverine and Deadpool mythos. As his name implies, Garrison is a mutant whose body was modified by the Canadian super-soldier program, Weapon X, the same mad scientists who transformed Logan and Wade Wilson into their more famous alter egos. Nothing has been said about the Deadpool 3 plot, but we can assume there will be more mutant experiments in the film. That would be a perfect introduction for Kane.

The art alone screams Cavill’s name. Since Kane walked out of Marvel’s ‘90s era when practically every character looked like a raw-meat-devouring, ‘roided bodybuilder, fans would love to see an absolutely jacked actor in the role. Plus, Weapon X actually looks kind of like Cavill.

There’s been so many rumors about the former Nathaniel Essex coming to live action. Jon Hamm has said he was interested in playing the role in the Fox-verse of X-Men movies, and many theorists are confident Mister Sinister will be the mutants’ first major antagonist when they arrive on the silver screen.

A gifted geneticist with an unhealthy dose of classic mad scientist, he’s currently getting a push in the comics. In fact, next year, he’ll transition from X-Men villain to take on the Avengers in “The Sins of Sinister,” which has MCU implications written all over it. Disney and Kevin Feige love their A-list actors, and Cavill fits that bill. Plus, it’s a role that would help him shed the perception that he can only play Superman.

Truth be known, I have never been a fan of Beast. He’s always been a boring character no matter the attempts to inject him with personality in the comics. When Kelsey Grammer portrayed Dr. Hank McCoy for X-Men: Last Stand, that was quite possibly the perfect casting for the mutant aristocrat. After all, Beast is essentially a blue-furred, less-funny Frasier Crane.

Since then, whether it’s on the screen or in the comics, Marvel has looked to make him more of an action hero and, thus, a bigger star. Cavill could be perfect here, having just the right mix of intellect and brawn.

En Sabah Nur is an all-time favorite among X-fans. Sure, Oscar Isaac’s turn as the original mutant in the woeful X-Men: Apocalypse left much to be desired, but this is a character too amazing to leave on the shelf.

Between the comics and the beloved X-Men: The Animated Series, Apocalypse has legions of fans across the globe. He’s one of the most powerful and imposing figures in the franchise, which is something of a niche for Cavill. Put him in the role, give him some added bass for the voice similar to that of X-Men: TAS (something Isaac’s portrayal desperately needed), and you’ve got yourself a winner.

Josh Brolin has the market cornered when it comes to Cable, but there’s nothing stopping Marvel from opening the gates of Age of Apocalypse. This fan-favorite else-world tale reimagined the Marvel Universe if Charles Xavier had died rather than having been paralyzed. As all alternate-timeline stories do, AOP turned the X-Men world on its ear. Magneto founded the X-Men in Charles’ name, Sabretooth took Wolverine’s place on the team, and Cyclops was Mister Sinister’s right-hand man. All the while, Apocalypse was exterminating mankind.

Among Sinister’s many experiments in the AOP timeline was genetically engineering this world’s Cable by manipulating Cyclops and Jean Grey’s DNA. Only here, Cable wasn’t infected by the techno virus that gave him his signature metal arm. Instead of becoming the time-traveling badass, he was simply Nathan Grey with telepathic abilities that rival his mother’s.

Through the power of the Multiverse, Nathan could be introduced to the MCU, and having Cavill in the role would immediately give the part fan credibility.

With Hugh Jackman returning as Wolverine, fans are wondering how many other actors from the Fox-verse will make the transition to the MCU. Between Ian McKellen and Michael Fassbender, we have been treated with truly amazing Magneto performances, and either of those actors would be welcomed to the MCU with open arms. However, there’s been plenty of rumblings about recasting the part, but it would take a classically trained actor to live up to the legacy established by McKellen and Fassbender. Not only does Cavill check that box, but he also has the ‘90s Jim Lee X-Men look to boot.

One of the original X-Men from the Stan Lee/Jack Kirby era, Angel was never the most popular member of the team. His superpower was…wings. Besides being able to fly, that was it—just a pair of wings. Compared to virtually every other canonical mutant, Warren Worthington III was a pushover. Then he got a much-needed upgrade.

After his wings were mutilated and later amputated during the “Mutant Massacre” story arc, Angel was abducted by Apocalypse. En Sabah Nur gave him organic metal wings that were sharp enough to cut through virtually anything. He could also shoot razor-sharp projectiles and had an unquenchable thirst for blood. He was then renamed Death as a member of Apocalypse’s Four Horsemen, though he took the name Archangel following Apocalypse’s defeat. In later years, the character was written as having a piece of Apocalypse embedded in his psyche, something that is constantly battling Warren for control of their body. Cavill would effectively pull off both personalities.

Cavill would be the actor to give Cyclops the credibility he so rightfully deserves. Long viewed as the boring, straight-and-narrow X-Men team leader (who makes questionable choices), there’s so much more to Scott Summers. He’s a complex character with a rich history that would be compelling on the screen. Unfortunately, he’s often relegated to supporting role in the movies and comics, usually portrayed as Wolverine’s dorky rival in pursuit of Jean Grey’s affection. Just like any good Hallmark rom-com will teach you, it’s only natural the audience has an instant disdain for clean-cut Boy Scout in that situation.

Let’s say Cavill is put in the role. Suddenly, Scott doesn’t seem like the romantic consolation prize anymore. In fact, the former Superman actor would instantly raise the perception of Cyclops to the star of the show.

At one point, there were fancastings placing Cavill in the role of Wolverine. Personally, I don’t see him as Logan. Being a comic purist, he’s too big for my liking, and I’m rooting for Taron Egerton to get the role. With that in mind, imagine pairing Egerton in full Wolverine attire with his natural archnemesis, Sabretooth, as played by Cavill. That could be a moment that would leap straight from the comics and onto the silver screen in epic fashion.

For non-comic readers, think of Sabretooth as the Venom to Wolverine’s Spider-Man. Victor Creed is meant to be bigger, more savage, and more bloodthirsty than Logan, who was originally written as Sabretooth’s son. In fact, the best stories of their rivalry told of Victor stalking Logan around the world, tormenting him on his birthday, usually by killing Logan’s love interest.

Certainly, Liev Schreiber was the highlight of a terrible movie when he played Sabretooth in X-Men Origins: Wolverine, and I would have no issue with him returning. Still, the prospect of Cavill taking over that part and terrorizing Wolverine is simply tantalizing.

If there is one X-Man Cavill was born to play, it’s Colossus. Throughout the years, he’s never been given the chance to shine in a starring role, and it’s long overdue. Sure, we’ve seen him brought to life in the X-Men films and both Deadpool movies, but there’s fertile ground for a dramatic interpretation.

The character arrived on the scene in 1975 when fears of communism were rampant. Piotr Rasputin was aimed to defy stereotypes of the militaristic, anti-American Soviet trooper and instead be a kind soul and genuine hero. In the current global political climate, writing his story to reflect Russia’s invading Ukraine would modernize the character and add an extra layer of complexity, whether as Russian or Ukrainian.

It doesn’t hurt that Colossus has always been drawn with a Mr. Olympia physique. In the 1980s, he closely resembled Arnold Schwarzenegger. The next best thing would be Cavill in the role, plus he’s actually a superb actor unlike dear Arnold.

Put it all together, and Cavill would reinvent Colossus for the MCU in grand fashion.