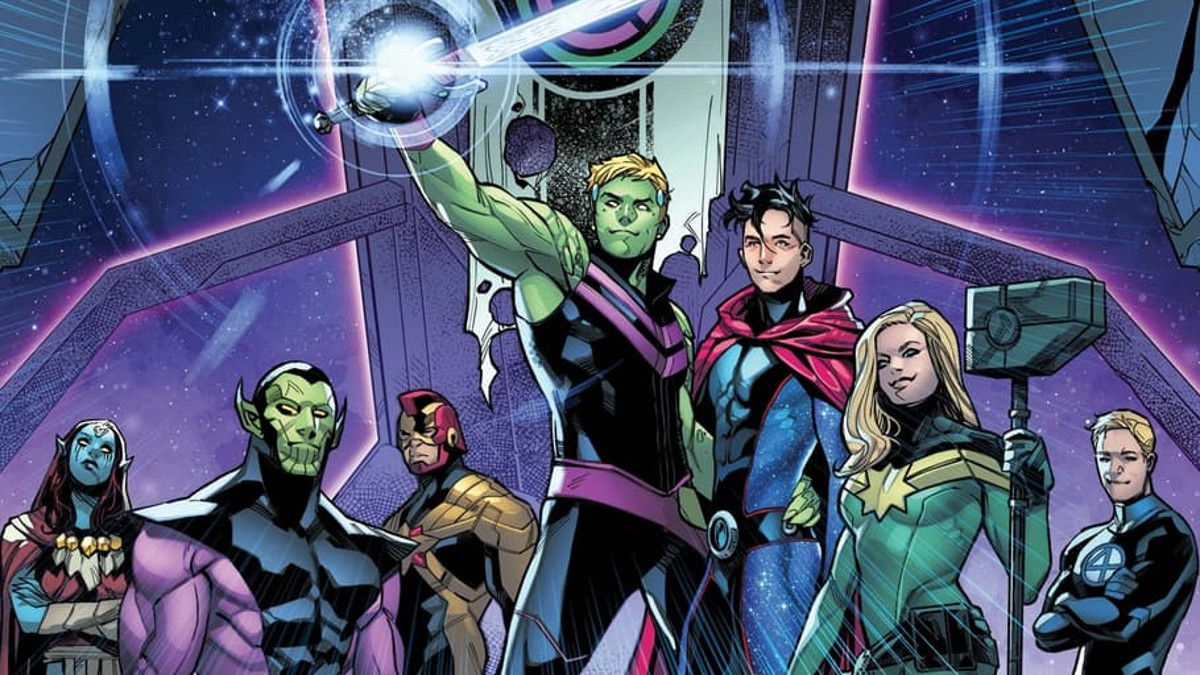 The Young Avengers is a superteam that’s destined to eventually join the MCU, and even though the team hasn’t been confirmed for Phase 5, that doesn’t mean it’s not too late to incorporate them.

Feige has addressed the absence of the Young Avengers, but that hasn’t stopped anyone from hoping they’re still coming. There are multiple MCU Phase 5 projects which could have direct ties to the formation of the Young Avengers. These include Ant-Man and the Wasp: Quantumania, Captain America: New World Order, Agatha: Coven of Chaos, and Secret Invasion. Although these characters haven’t been confirmed yet, it would make a lot of sense for the Young Avengers to start assembling.

Young Avengers was created by writer Allan Heinberg and artist Jim Cheung and introduced four young heroes who joined together after the Avengers Disassembled event, from writer Brian Michael Bendis and artist David Finch. The founder and leader of the team is Nathaniel Richards/Iron Lad who was from the year 3016 and lived on an alternate earth. He was given psychokinetic armor, that he controlled mentally, by none other than Kang the Conqueror, so obviously there’s an ulterior motive here.

It’s revealed that Nathaniel is actually the younger version of Kang and he’s destined to turn bad and become evil just like the real Kang. But, when he has a vision of his downfall, he rebukes the Conqueror and travels to Earth-616 to enlist the help of the Avengers to defeat his evil future self, and he ends up putting together the Young Avengers team.

Nathaniel enlists Eli Bradley/Patriot, the grandson of Isaiah Bradley, the grandson of Eli Bradley who was a Black soldier who was experimented on as part of the Super Soldier Program, and Wiccan who’s the reincarnated son of Scarlet Witch and Vision. Not to mention Teddy Altman/Hulkling, the son of the superhero Mar-Vell and the Skrull princess Anelle. This was the original roster and, based on the upcoming MCU projects, we could be seeing them all (and more members) sooner rather than later.

Kang the Conqueror and Iron Lad

Ant-Man and the Wasp: Quantumania will be the first movie of Phase 5 and in it, Scott Lang/Ant-Man and his team are brought into the strange Quantum Realm where Kang has been stuck. While making young Nathaniel a major plot point might detract from the main storyline, he could either be referenced or he could be given a post-credit sequence that sets up his arc for him to start assembling the Young Avengers. Kang is a master planner and he’s always got epic machinations churning in that maniacal mind of his. It wouldn’t be beyond him to foresee (and cause) the destruction of the Avengers and to attempt to use an earlier version of himself to have a greater hold on his reign.

There’s been speculation that Scott Lang might meet his end in this movie with him facing one of Marvel’s greatest supervillains, and to be honest, Ant-Man is outclassed here. The movie could be setting up his daughter Cassie Lang as a hero. She’s wearing a superhero costume in the trailer so she may be on her way to becoming the hero Stature, which occurs in the comics after her father dies. In Avengers Disassembled, Ant-Man meets his end when a resurrected and zombified Jack of Hearts arrives at the Avengers Mansion. Scott goes to greet him and Jack of Hearts explodes, killing Ant-Man. This leads to Cassie and her friend Kate Bishop deciding to join the Young Avengers.

In Captain America: New World Order, Sam will be finding his own path as the new hero claiming the shield. He will have multiple problems to face in the form of President Ross, Valentina Allegra de Fontaine, The Leader, but there’s an opportunity to include Patriot, too. Eli Bradley has already been set up in The Falcon and the Winter Soldier as the protective grandson of Isaiah Bradley. Sam found out about Isaiah’s Super Soldier Serum experimentation when Bucky took his friend to the man’s house, where they also encounter Eli. It’s been reported that New World Order will involve a storyline with Black Americans being experimented on with super soldier serum and it could be an opportune time to bring Eli back and set him up as a hero, continuing his grandfather’s legacy.

In the comics, Iron Lad was at first considered Eli’s uncle Josiah X as a potential team member, but since he was MIA and Eli was showing signs of having super soldier abilities, the latter was chosen. Eli first claimed that he received his powers via a blood transfusion, and it was assumed that this came from Bucky, but he in fact used the Mutant Growth Hormone (MGH) to simulate those abilities. There are multiple ways the MCU could go with this, but it could be cleaner to make Eli Bradley’s abilities come from his genetics rather than him taking MGH. If it does go down a similar route, Eli could discover a new batch of the Super Soldier Serum, and for the purpose of defending those he loves, he could choose to take it and become Patriot.

Agatha: Coven of Chaos and Wiccan and Speed

Wanda and Vision’s sons Tommy and Billy have appeared in Wandavision and Doctor Strange and the Multiverse of Madness. The next time we could see them is in the upcoming Wandavision spinoff, Agatha: Coven of Chaos. The full plot details aren’t known as of yet, but there’s enough information that could give us an idea of where it’s going. At the end of Wandavision, Scarlet Witch defeats Agatha and confines her to remain in Westview.

It’s likely that Agatha will find a way to break out of her magical purgatory and seek vengeance on Scarlet Witch, and considering Agatha’s obsession with her, she could go after her children, Billy and Tommy. Agatha could pluck the ones from the universe Scarlet Witch interacted with in Multiverse of Madness since she has a connection to those specific children, only this time they could manifest their abilities. Instead of them being used as plot devices again, they could begin to fend for themselves and afterward join the Young Avengers. Billy becomes the magical Wiccan and Tommy becomes the speedster known simply as Speed.

Skrulls and Kree and Hulkling

The Secret Invasion TV series will address the Skrulls, shapeshifting aliens, who have infiltrated various levels of society to take over the world. It will take Nick Fury and a team of allies will come together to stop this plot, but it could be a way to bring in Hulkling. As established in Captain Marvel, the Skrulls have a longstanding war with the militaristic alien race known as the Kree, which could be how Teddy gets introduced.

Mar-Vell is a lauded soldier in the Kree army and won many victories against Skrull armies, but when he crossed enemy lines he fathered a child with Anelle of the Skrull Empire, creating Teddy. Hulkling has shapeshifting powers, a fast healing factor, and he received his name because he’s green and resembles the Hulk. It’s doubtful that all this will happen in Secret Invasion, but revisiting the Mar-Vells (a gender-swapped version was played by Annette Bening in Captain Marvel) and the Kree conflict would be a step in the right direction in bringing Hulkling to the MCU.