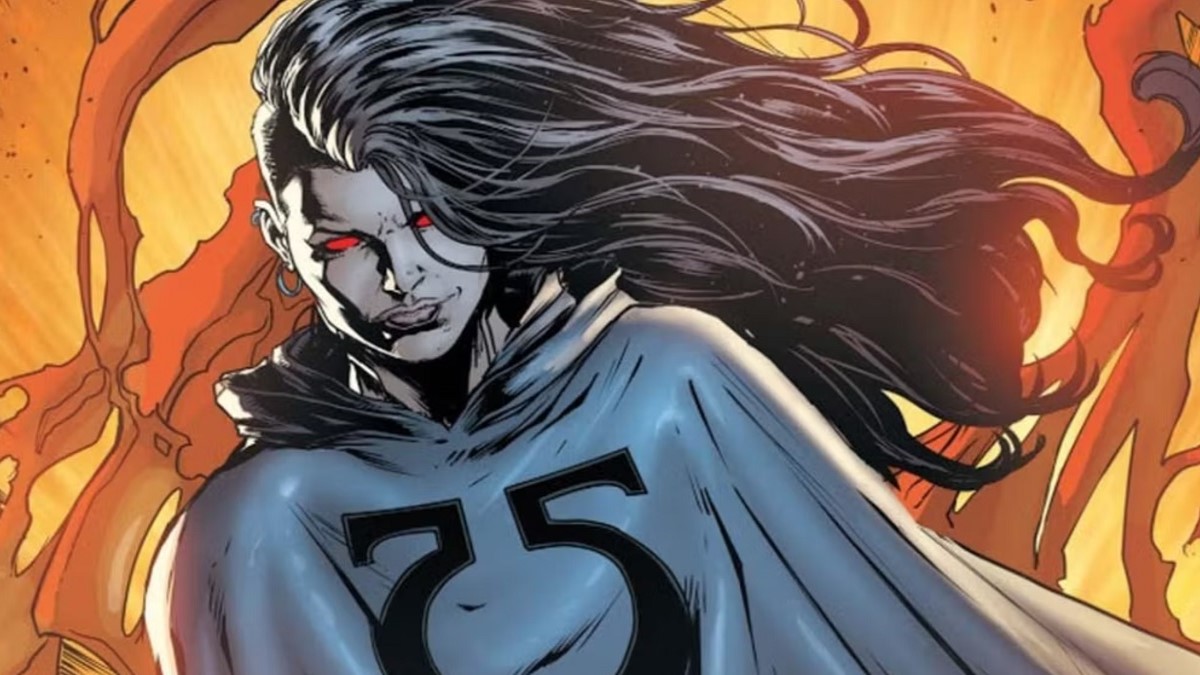 Love her or hate her, there’s no argument that Brie Larson is the MCU‘s most polarizing figure.

She’s had a tumultuous relationship with the Marvel fandom. Since the moment she was cast as Captain Marvel, a highly vocal subset have railed against her. Even before Captain Marvel’s theatrical release, trolls were review-bombing the film on Rotten Tomatoes.

The constant barrage of negativity must get under her skin, judging by her past comments. In September, she was asked how long she would play Captain Marvel in the MCU, and her answer was less than star-eyed and full of wonder.

Despite the incessant criticism, Larson appears to be sticking around the MCU for the long haul. She’ll star in the Captain Marvel sequel, The Marvels, and she will likely be a central figure in upcoming Avengers movies. Still, comments like the one from September make us wonder if she’s ready to abscond from the MCU and leave the negativity behind. Who would be ready to welcome her with open arms? Co-chair of DC Studios, James Gunn, and there are plenty of quality roles the Oscar-winner would be perfect for.

Wonder Woman isn’t the only famous Amazonian in the DCU. In some ways, Donna Troy is actually more interesting than her former mentor.

Donna’s had multiple origin stories over the years. First appearing in 1965, she was a founding member of the Teen Titans and spent the Silver Age as Wonder Woman’s sidekick, Wonder Girl. In the 1980s, her story was rewritten a couple of times. One version was that she predated Wonder Woman and descended from the Titans of Ancient Greek mythology. Later, she was rewritten as basically a Wonder Woman variant who was abducted and cursed to live lives that ended in tragedy. The more modern interpretation writes her as being one of infinite Donna Troys whose collective job is to record the events of the Multiverse.

Forget Uma Thurman’s cheesy Poison Ivy in one of the all-time duds of superhero cinema, Batman and Robin, fans have been begging for a worthy live-action Ivy for decades.

Once just another face in Batman’s endless cycle of quirky lower-tier villains, Poison Ivy has been earning a growing fandom since Batman: The Animated Series. Although a side character in the Batman: Arkham games, her portrayal on consoles only increased her popularity. These days, she’s romantically coupled with the uber-popular Harley Quinn both in the comics and in Harley’s self-titled cartoon series. The only thing left is to finally give her the proper live-action treatment. Pair Larson’s Ivy with Margot Robbie’s Harley Quinn, and you have a recipe for magic on the screen.

There’s been talk and gossip about the supernatural Justice League Dark getting a live-action movie or streaming series for years. With Gunn’s love of horror, comedy, and comic books, this seems like the perfect combination for his DCU vision. Cast Larson in one of the lead roles, and this is a box office hit waiting to happen. Besides, Zatanna is a fan-favorite character that comic readers have wanted to see get her due on the big screen for years. She is one of the most powerful magicians in the DC Universe, casting spells with her trademark backwards speech.

As the world awaits what Gunn and Peter Safran have planned for the revamped DCU, Gunn has already said that the Green Lantern Corps. will be central to their 10-year plan. We know there’s an HBO Max show still in development that will star John Stewart. While he will serve as the show’s protagonist, the GLC series should introduce numerous Green Lanterns, including Soranik Natu.

A gifted surgeon on her native planet, Korugar, she is the daughter of the Corps’ infamous villain, Sinestro. As a Green Lantern, he more or less enslaved the planet, which led to his expulsion from their ranks before he founded his own fear-based squadron, the Sinestro Corps. His actions resulted in the people of Korugar despising both the GLC and Sinestro. When Soranik is recruited by the Green Lanterns, she is persecuted on two different fronts. It makes for one of the most conflicted characters in the Lantern mythos, which always makes for great development on the screen.

Simply from a visual standpoint, Larson would make for a believable, comics-accurate Supergirl. With her blonde hair and chiseled physique, she definitely looks the part. Larson also has the screen presence needed to not only embody the character but command the audience to take her seriously.

Like so many of the characters on today’s list, Supergirl needs a new narrative. It’s time to present her as more than Superman’s little cousin. Larson isn’t likely to go along with a by-the-numbers type of script, either, so having her influence would likely elevate the story to one that features Supergirl as a fully fleshed-out character.

No one is arguing that Anna Diop hasn’t done a fantastic job as Starfire on the HBO Max/TNT Titans series. The show has been a massive hit with DC audiences, but it wouldn’t compare with silver screen incarnations. With so many rumors about Nightwing getting his own feature film, it begs to reason that the entire Teen Titans series could get a big-screen makeover. That could be the makings of an all-new film franchise for the DCU, and Brie Larson as Starfire would be magic.

For all the complaints about Captain Marvel’s MCU portrayal, Starfire is the polar opposite. While many fans have deemed Carol Danvers as unlikable and arrogant, Starfire is much more fun. However, that doesn’t diminish her importance to the Titans or her power levels. She’s been able to hold her own with the likes of Superman and Trigon, and it’s reasonable to assume Starfire would give Captain Marvel all she could handle.

Just like stepping into Superman’s boots post-Henry Cavill, taking over the Wonder Woman role from Gal Gadot would be a tall task. Gunn hasn’t exactly debunked the rumors that she’s out of the role, but he hasn’t said she’s going to be part of his DCU. With Wonder Woman 3 having been canceled, it leaves us curious what is happening behind the scenes there.

Truth be told, it doesn’t look good for Gadot. As Gunn rewinds the clock for a younger Superman adventure, Jason Momoa seemingly contemplates changing characters entirely, and Ben Affleck appears more interested in working as a director than actor, at least in the superhero realm, the signs point toward Gadot’s exit. What better part for Larson to step into than the original female superhero and cultural icon, Wonder Woman?

Captain Marvel haters along with hardcore Gadot fans will immediately scoff at the notion, but Larson could pull it off. For one, she’s a gym junkie, posting many workout videos as she keeps her physique in superhero shape. As much as we have enjoyed Gadot’s portrayal, her acting is not exactly award-winning material. On the other hand, Larson is just that, having taken home an Oscar for Best Actress for 2015’s Room. I have no doubt that she could add a level of nuance and complexity to the character and win over even the most ardent of dissenters.

From one Carol to another, this could be the perfect spot for Larson in what could be a major role in the coming DCU. Between both the Green Lantern HBO Max series and the potential for another movie, that leaves the door open for Hal Jordan and his longtime girlfriend, Carol Ferris. Better yet, let’s see Star Sapphire get her due on the screen.

Rather than simply playing Hal’s love interest and the damsel in distress, Carol needs to follow her comic roots and get her own power ring. In the comics, she is also known as Star Sapphire, complete with her own Lantern Corps. It adds a much-needed layer to her character that could play out in dramatic fashion on a movie screen.

Here’s a role that has Brie Larson’s name all over it. Grail is one of the premiere villains in all of the modern DC Comics with power levels that can stand against even Superman. She’s also highly intelligent and depraved. If Larson ever wanted to make fans forget she was Captain Marvel, this would be the one.

Mainstream audiences may not recognize Grail, but modern comic readers will know the name. She is Darkseid’s daughter and heir apparent to his throne on Apokolips. Instead of being a New God, she is part Amazonian and was actually born on Themyscira at the same time as Wonder Woman. In fact, Grail’s mother, Myrina, is the mythical island nation’s deadliest assassin.

Although Grail is a recent addition to the DC pantheon, she’s already defeated virtually all of the heavy hitters. She single-handedly took down the Justice League and, with the help of the Anti-Monitor, orchestrated Darkseid’s most recent death (but these are comics, so we know he’ll be back).

What? You were expecting Wonder Woman as number one?

Understandably, Big Barda could use a name change before she graces the silver screen. At one point, she was predicted to appear in the DCEU alongside her husband, Mister Miracle, when the New Gods were in the running for the live-action treatment. While that project fell through, it could prove to be for the best as it would give Larson a fresh canvas on which to paint her portrait of a complex, torn Barda.

That’s the thing about the poorly named Big Barda; she’s complicated and layered. Once the commander of Darkseid’s elite death squad, the Furies, she fell in love with Mister Miracle and turned against her former god and master. During her time on Apokolips, she was tortured and broken before being rebuilt into an instrument of death and carnage with unquestioning allegiance to Darkseid. The only other person who can remotely understand what mental trauma she fights every moment is Scott Free, who underwent a similar upbringing on Apokolips.

Barda is anything but the standard superhero. Typically, comic writers have portrayed her in a comedic light as Miracle’s volatile and overbearing spouse, but there’s so much to explore with her. It’s untapped potential that could be one of the best, most subversive films or HBO Max series DC has ever produced. Larson has all the credentials to bring Barda to life and make all those Captain Marvel haters eat their words.