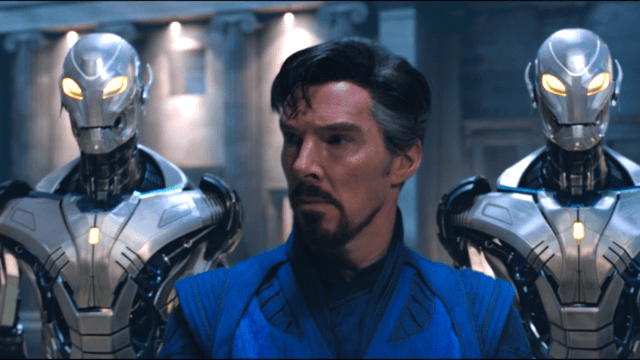 One of the many mysteries and unexplained parts of Doctor Strange in the Multiverse of Madness has lit up the internet, with fans trying to work out who or what made the Ultron bots in the film.

Featured prominently after Doctor Strange and America Chavez get transported to Earth-838, the Ultron bots work for the mostly incompetent and hubris-blinded Illuminati as security. Just not particularly good security, as they get eviscerated by Scarlet Witch during her raid of the headquarters.

Still, fans are very curious as to Earth-838’s story with the Ultron bots. Fan theories have popped out, and /r/MarvelStudios is having a field day speculating.

Popular theories prior to the movie’s release involved either an Iron Man variant portrayed by Tom Cruise, or a Hank Pym variant, much closer to resembling the original comic canon. These are still the favorites, but further ones have surfaced.

Some believe that Mister Fantastic’s portal entrance could be a key part in explaining them.

Nowadays, fans are though slightly more skeptical of Iron Man being involved in their creation, but there’s still belief.

The idea of the Tom Cruise variant also raises an interesting question around variants: do they all have the same faces or not? Spider-Man: No Way Home’s three Peter Parkers all looked different, as did many of Loki’s variants in his Disney Plus series. Is it just pure luck that all of Strange’s variants looked like Benedict Cumberbatch?

The reality is likely that we’ll never find out. Not all things need to be explained, and this might be a good example. Considering the number of multiverse shenanigans we’ve seen in recent years, it feels like we may need a small rest from variants.

Doctor Strange in the Multiverse of Madness is currently available to stream on Disney Plus.