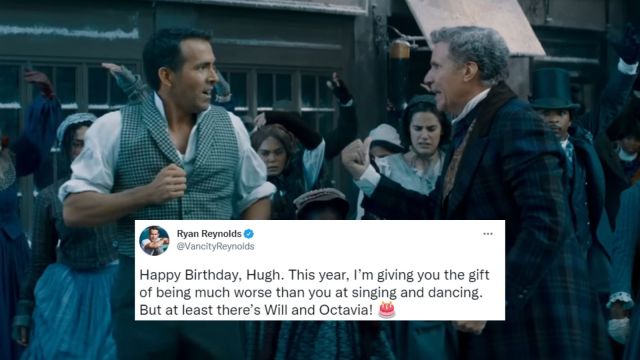 Image via Apple TV plus

How far would you go to promote your projects? Because it seems Ryan Reynolds may have found the newest viral marketing strategy to publicize your forthcoming feature: Admit that you’re not a triple threat compared to your co-star in an upcoming film, then segue to a trailer for your movie. Such a sneaky strategy, especially when said trailer does not feature said co-star.

Confused? Reynolds posted a tweet, dedicated to Hugh Jackman. The two have been somewhat close lately due to the recent announcement of Wolverine’s return in Deadpool 3. So it’s no surprise that Reynolds would greet his Tony-winning actor friend on social media. However, the tweet had a hidden motive, as the video featured Jackman dancing with Will Ferrell, which quickly turned into a movie trailer for Reynolds’ upcoming movie, Spirited.

Of course, no one in the replies was mad that Reynolds pulled this bold move. Some expressed excitement as they’re now keen to watch this upcoming Christmas movie. One even praised Reynolds for his creative advertising methods. What’s even more interesting is that Jackman himself liked the post.

What’s even more wholesome about this tweet is that it reminded fans who may have forgotten that today was Jackman’s birthday. So they’ve pilled on underneath the comments and wished the actor a happy birthday.

Spirited is an upcoming Christmas-themed musical starring Reynolds, Ferrell, and Octavia Spencer. The film will be released on theaters on Nov. 11 and on Apple TV Plus on Nov. 18.