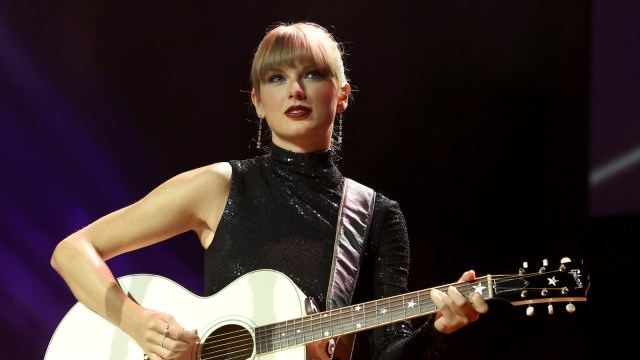 Appearing in 2012’s Les Misérables wouldn’t have necessarily pumped up Taylor Swift‘s reputation in musicals, especially if it was going to be followed up by the disastrous and nightmarish Cats anyway, so her not bagging the role of Cosette or Eponine probably worked out for the best.

Continuing to celebrate the release of Midnights, and breaking several streaming records while at it, Swift recently appeared in a bejeweled frock on the Graham Norton Show alongside a roster of other A-listers including Eddie Redmayne. The two of them pairing up on a talk show is something that no Swiftie would’ve possibly thought worthy of a second look, but as ever, looks can be deceiving.

In fact, it seems that Taylor and Eddie almost worked together on 2012’s Les Misérables starring Hugh Jackman and Russell Crowe, but the former didn’t get the gig for a very hilarious reason.

“Basically I was up for two roles,” Taylor explains. “I had the look of Cosette and the range, vocally, of Éponine, so it was established I was there for a good time but not for a long time. I wasn’t going to get the role.”

It seems that the producers insisted on seeing Taylor in full costume as Eponine, which basically meant turning her into a street urchin from the 18th century. So the first and probably last time Redmayne saw Swift on the set was in a very peculiar makeup. Eddie, meanwhile, recalls that his situation wasn’t any better, having had to work around an embarrassing episode of garlic breath for what he earlier had to eat.

Suffice it to say, it probably wasn’t meant to be. Of course, there’s no denying that the T-Swizzle’s vocal range would’ve been a huge help on the set of that film — which is still widely criticized for tapping actors with little to no singing chops in main roles — but Samantha Barks ended up doing a great job as Eponine. Swift impressed director Tom Hooper, though, and ended up casting her in Cats. All’s well that ends well, right?