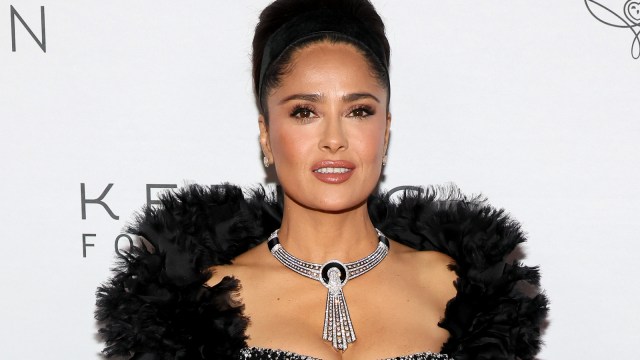 Salma Hayek has a way of capturing an audience’s attention and imagination in even the smallest roles.

When perusing the dozens of movies Hayek has been in since her debut nearly 30 years ago in 1993’s Mi Vida Loca, it becomes apparent that she hasn’t had as many leading roles as you might expect. That has in no way diminished her ability to bring life to a character and story, meaning Hayek is memorable in just about every appearance she makes

From her early work in From Dusk Till Dawn to her recent appearance in House of Gucci, relatively few movies feature her for a lengthy period of time. However, her appearance, the way she carries her characters, and her raw acting ability make these roles feel bigger than they actually are.

Hayek got to helm a tribe of superheroes in last year’s Eternals, and it looks like she’s on her way to making a different kind of, well, magic, next year after the recent release of the first trailer for Magic Mike’s Last Dance.

So, let’s examine her filmography and pick out the 10 best Salma Hayek movies.

Eternals sets the tone for a theme that’s present throughout Hayek’s career. When critics adore her portrayal of a character, it tends to be in a movie that audiences don’t really flock to for one reason or another. So, let’s start with the movie that’s also her highest-grossing film to date, last year’s Eternals, which drew Hayek into the Marvel Cinematic Universe for the first time.

The movie grossed $400 million, though audience reactions were tepid and critics didn’t find much to love either. However, Ajak is a memorable character and Hayek’s innate gravitas makes her very believable as the ancient leader of Marvel’s ancient immortal superteam. Hayek was undoubtedly solid as Ajak but unfortunately she didn’t get the great MCU movie she deserved.

Certified Fresh on Rotten Tomatoes, this 2017 film didn’t even break $10 million at the box office despite this big-name actress at the helm. Hayek plays the titular Beatriz, a massage therapist who winds up at a dinner party with ruthless rich guests (played by John Lithgow and Connie Britton) and ends up in a ferocious war of words with them. The back-and-forth between her and Lithgow are worth the price of admission alone.

Anyone who was even remotely into romantic comedies in the 1990s will have seen the very cheesy Fools Rush In. The movie was a mainstay in the days before streaming when watching whatever happened to be on cable TV was your only option. This means most channel hoppers will have caught different moments of the movie off and on, with many sticking around to the end credits.

Despite boasting Matthew Perry at the absolute peak of his Friends popularity, Hayek stole the movie and cemented her comedic credentials. In addition, it introduced her to a different audience on the heels of Desperado and From Dusk Till Dawn. Speaking of which…

The best thing we can say about this Tarantino/Robert Rodriguez team-up (the former as an actor, the latter as director) is that it’s memorable. Even now it leaves an impression thanks to the unexpected introduction of a legion of ravenous vampires midway through a realistic crime caper. This is where Hayek comes in, with an unforgettable scene as a seductive vampire queen.

Hayek’s role in From Dusk Till Dawn came as she was making upwards of four and five movies per year, but this is the role that likely stuck in a lot of impressionable minds back in the 90s.

We considered leaving Hayek’s many voice-acting performances off our list, but that would be a crime because she certainly made this movie what it is with her performance as Cutlass Liz. The stop-motion movie comes courtesy of British animation powerhouse Aardman Animations, who previously hit it big with Chicken Run and the Wallace and Gromit movies.

The Pirates! ended up as a modest box office success, grossing $123 million and scoring the studio a nomination for Best Animated Feature at the 2013 Oscars. The intricate claymation is a big part of its appeal, though Hayek stands out even with a stacked voice cast that includes Hugh Grant, Martin Freeman, and the always-fun Brian Blessed.

The 2011 Shrek spinoff practically had to include Salma Hayek, who’s well-known for her repeated collaborations with Puss in Boots’ voice actor Antonio Banderas. She plays Kitty Softpaws, Puss’ love interest and a talented thief in her own right. Even when playing a pair of CG animated cats Banderas and Hayek’s chemistry is off the charts and their performances go a long way to making this more than a cheap cash-in on the popularity of Shrek franchise.

Kevin Smith’s controversial take on Christianity finds Hayek playing the muse Serendipity, a self-described artist and inspiration to others. Hayek’s performance helps her character toe the line between celebrating and mocking faith, thumbing her nose at God while still just about respecting her. Hayek clearly understands what Smith set out to achieve with this ambitious film and sprints full speed ahead with the role. In a storyline ripe with ridiculousness Hayek is a head above the rest of the cast, being down-to-Earth and above it all, all at once.

The second in what became Rodriguez’s Mexico Trilogy, Desperado is widely considered the best of the three. Hayek wasn’t present in the first film, El Mariachi, and her charisma noticeably elevates the action-packed sequel. There’s a good reason this is considered her breakout role, as though Banderas is at the center of the movie, Hayek is its heart and soul. Aside from the bravura action sequences Desperado is also a celebration of the way the two play off each other’s facial movements and subtleties, turning moments without words or dialogue into something far more epic.

Depending on which movie poster you first saw for this movie, your impressions and expectations could wildly differ. One features Hayek and costar John C. Reilly dressed as royalty standing alongside each other. Another is far more captivating and disturbing, showing Hayek seated at a large table with her hands around a plate of food and blood smeared across her face. What is this food though? Well, it appears to be a very, very large heart. And if you’ve seen the movie, you discover that this is indeed an accurate representation of what goes down.

A riveting and inventive horror take on several children’s tales, such as Cinderella and Rapunzel, Tale of Tales might have slipped under your nose, and if so, it’s worth a watch if you can stomach these types of grisly tale.

Hayek’s most well-rounded and well-known role is her portrayal of the iconic Mexican surrealist artist Frida Kahlo. Hayek received an Oscar nomination for her performance, and she embodies and evokes Frida as if the artist herself were on screen. The cinematography and artistry of the movie match Hayek’s vibrant portrayal with colorful and eye-catching visuals. Frida garnered six Academy Award nominations in all, with two wins for Best Makeup and Best Original Score.

Hayek personally brought this movie to life, doing a tremendous amount of legwork to secure access to Frida’s actual artwork and began championing for the movie to get made nearly a decade earlier when she was told she was too young for the role. Eventually, it got made thanks in large part to Hayek’s efforts, with her also bringing on board a lot of the costars and personally asking Alfred Molina to play Rivera.

Frida the film, and Kahlo the artist, both still remain prominent to this day and as always, are worth another look.