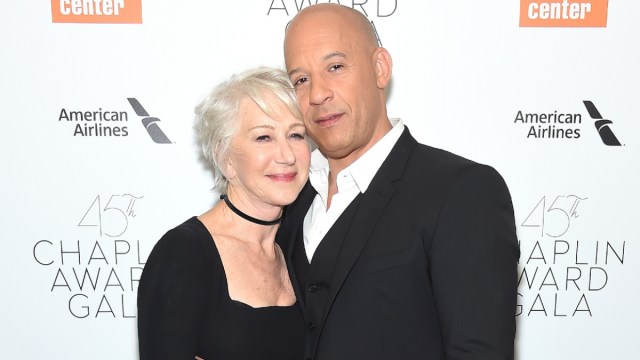 It’s no small secret that Vin Diesel and his Fast and Furious co-star Helen Mirren share an unlikely and beautiful friendship. In fact the 76-year-old has openly admitted that she “begged” Diesel for a role in the franchise, and has since appeared as Magdalene “Queenie” Shaw in The Fate of the Furious (2017), the Fast and Furious spinoff Hobbs & Shaw (2019), and F9 (2021).

Although it hasn’t yet been officially announced whether Mirren would appear in next year’s Justin Lin-less Fast X, which is set to be released on May 19, 2023, it sure seems Queenie will be back based on a behind-the-scenes photo Diesel posted to Instagram on Tuesday.

“When in Rome…” Diesel captioned a black and white shot of himself and Mirren sitting on a bench, with his arm tenderly draped around her neck and her holding his hand. Production began on the 10th installment in the franchise earlier this spring and Rome was indeed among the filming locations.

Mirren previously opened up about her undeniable chemistry with Diesel when she was featured in a cover story for People magazine’s 2022 Beautiful Issue earlier this year.

“Chemistry is inexplicable — it just is,” she told the publication. “You put two people together you think — and movies constantly make this mistake — oh, the chemistry’s going to be fantastic! And then it’s disastrous.”

“Even very interesting people, people who have great chemistry offscreen to the extent of maybe, cough, excuse me, even having an affair or marrying each other, onscreen have no chemistry whatsoever,” she explained. “Whereas the most random people just have chemistry. And I adored Vin from the moment I met him.”

When asked what makes his co-star so beautiful, Diesel likewise heaped on the praise.

“What makes Dame Helen Mirren so beautiful? I’ll tell you,” Diesel said when he learned she’d been named the cover star of PEOPLE’s Beautiful Issue. “She has a charisma that is timeless. She has looks to kill and always has. She has a jovial spirit. But I think the thing that is most attractive about Dame Helen Mirren is the way she makes you feel. She always makes you feel appreciated and loved. And for that, I love her forever.”

Unfortunately, if anyone was thinking of shipping the pair, they’re both happily married. Diesel has been married to his wife, model Paloma Jimenez, since 2007, while Mirren has with with her husband, director Taylor Hackford, since 1986.