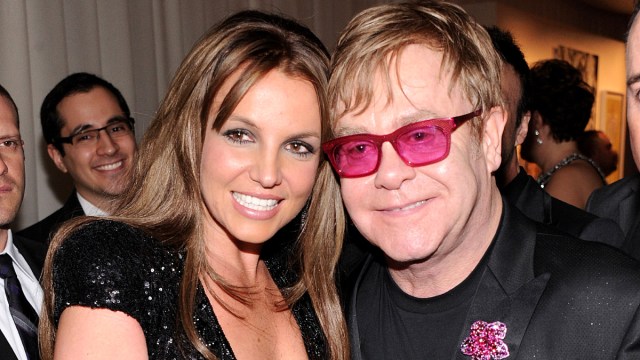 Rumors of Britney Spears‘ retirement may have been greatly exaggerated, as the 40-year-old pop star is reportedly recording a duet with Elton John for a new fresh new take on his 1971 classic hit “Tiny Dancer.”

Page Six is reporting that Spears “quietly met” with John at a Beverly Hills recording studio last week and that the track will be released by Universal Music next month. Sources say that the idea was apparently John’s, but as a fan, it wasn’t difficult to get Spears on board. The track will be her first single since “Slumber Party,” which appeared on her 2016 album Glory.

“This was Elton’s idea, and Britney is a huge fan. They have recorded a remix of ‘Tiny Dancer’ as a full duet — and it is incredible,” one music industry insider shares.

“They’ve already played it for people at their record label, and everybody is freaking out. It is so good,” the source teases. “They are saying this is going to be the song of the summer.

“Britney is officially back. She’s back to work, and she’s super excited.”

The recording session was reportedly overseen by record producer Andrew Watt, who has also worked with artists such as Justin Bieber, Miley Cyrus, Ozzy Osbourne, Pearl Jam, and others in the past. In 2021, Watt also took home a Grammy Award for Producer of the Year, so it sounds as if Spears and John are in good hands.

It’s been a big year for Britney, who was released from her 13-year conservatorship last November, and recently wed her longtime boyfriend Sam Asghari in a star-studded wedding last month. If Spears wants to make a comeback, it seems like there’s no time like the present.