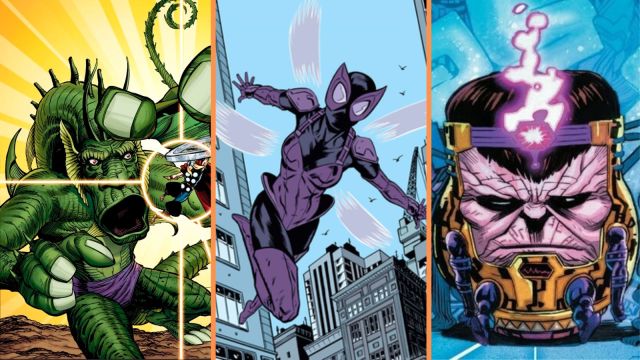 Marvel‘s previously slated Disney Plus series Armor Wars is being turned into a movie, with very little known so far other than two members of its cast.

Don Cheadle will star again as James Rhodes / War Machine following several previous Marvel Cinematic Universe outings as the character, meanwhile, Walton Goggins is back as Sonny Burch following a debut in Ant-Man and the Wasp. Yassir Lester will write the film, with his filmography previously involving a lot of comedy shows like Girls.

But a superhero movie is only as good as its villain, and there are plenty of characters who could serve as an expert foil to War Machine. Some of these include bizarre gimmick villains, fan favorites, and returning characters from previous MCU films.

Marvel villains who could appear in Armor Wars

Some absolute gem villains could make their debut in the film, here are some of our picks:

A Scottish mercenary who was hired by A.I.M. to attack S.H.I.E.L.D., he would be one of the lesser-known villains to get a cinematic debut but his nationality could tie in very nicely to the British-set series Secret Invasion, which is believed to lead directly into the Armor Wars movie. The character appears in the Armor Wars comic run, which makes him feel a natural fit.

Last season during Hail to the King in prison alongside Ben Kingsley’s Trevor Slattery, Justin Hammer has been very much missing from the Marvel Cinematic Universe. First appearing in Iron Man 2 with Sam Rockwell portraying him, he’s got the exact swagger and star power Armor Wars could need. He feels like the most likely inclusion in the film, with the character crucial in Iron Man comics for providing weaponry to criminals.

There’s been a serious lack of giant-dragon-men in the MCU to date, with Shang-Chi and the Legend of the Ten Rings only giving us a normal serpentine-like dragon. Frankly, it’s not good enough. The people demand a giant bipedal dragon man from outer space to show up and be a villain. Fin Fang Foom was one of Iron Man and War Machine’s first villains in the comics and needs a live-action berth.

Believed to be making his debut in Ant-Man and the Wasp: Quantumania, MODOK is one of the true odd villains of the Marvel canon. A giant, shriveled face put into a mobile throne, he’s traditionally the head of A.I.M. which has only seen brief appearances to date in the MCU with Aldrich Killian the head during Iron Man 3.

Traditionally a villain for both the Iron Legion and for Spider-Man, four different characters have taken on the role of the Beetle since debuting in 1964. One of them has already appeared very briefly in the MCU, with Janice Lincoln part of Mysterio’s team in Spider-Man: Far From Home. The most well-known comics version is arguably Abner Jenkins, who made his own versions of Iron Man suits after becoming disillusioned with his 9-5 job as an aircraft engineer.

Part of the original comic run of Armor Wars, Jack Taggert is the one who initially defeats Iron Man with his own superpowered suit the size of a building. He’s later appeared sparingly in Marvel canon, with it revealed Stark had actually faked his own death during his fight with the Firepower suit. A neat choice of a villain if they’re in need of comic accuracy.

No, not the fictional comic book hero from The Simpsons. Radioactive Man has been around in the Marvel canon for sixty years, with him a classic case of Marvel villains being too fascinated by science. Chen Lu overdoses on radiation in hopes of fighting Thor, only to become a monster. He’d be a fun character to do visually, with him either in a glowing green or in a hazmat suit.

Marvel has their own fear-loving Scarecrow villain, with theirs a talented contortionist and crow-whisperer. A long-time villain of Iron Man despite their vastly different skill sets, he could make for an excellent reimagined villain and turns into something far more fierce than in the comics. Having worked alongside Chameleon and the Maggia in comics, he could be introduced as one of many mobsters who get their hands on Stark tech

Last seen in Ant-Man and the Wasp, Ghost is one of the very few Marvel villains who hasn’t ended up in a grave. Confirmed to be a member of the Thunderbolts film, it would make a lot of sense for the character to show up before the film in Armor Wars. Shown to be more of a tortured villain rather than outright evil, it would link well with the confirmed inclusion of Sonny Burch.

Since his death in Avengers: Endgame, there’s been endless speculation on a potential return of Robert Downey Jr. to his iconic role of Tony Stark. Considering the original Armor Wars story involves him faking his death, what would be a more seismic change than having him still be alive after all this time… and a villain? It’s highly unlikely Downey will return to the MCU anytime soon, but if he does it’d be very interesting to see him as an antagonist.