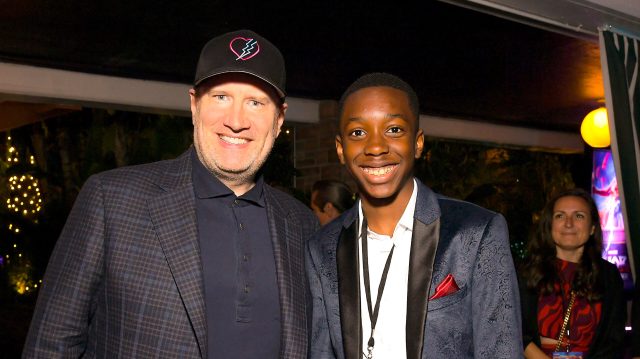 The movie Thor: Love and Thunder featured a number of regular Thor-movie characters but it also featured some new ones. Gorr the God Butcher (Christian Bale) was introduced as the antagonist and part of his evil plan is to kidnap all the children in New Asgard.

However, thanks to new character Axl, played by Kieron L. Dyer, Thor is able to prevail and save the day. In a recent interview with Movieweb, Dyer revealed what it was like working side by side with Hemsworth in the movie.

Axl is the son of Heimdall (Idris Elba) and Grace (Eliza Matengu), and he was born with the name Astrid. He changed his name to Axl because he fell in love with the band Guns N’ Roses during his time on Earth. Dyer said Axl also inherited powers from his father.

“He inherited his father’s ability to see across the Nine Realms and to project people to where he is and stuff like that,” he said, adding that the part was “quite a big legacy to uphold.”

While Heimdall has been in the comics since the ’60s, Axl is a brand new character to the Marvel Cinematic Universe (MCU). Dyer remarked how exciting it was to play someone that’s never existed on film or in comic books before.

“I got to make it my own. Since Axl is not a character in the comics, I had to read up on Heimdall and his abilities,” he said. “What you can see in Thor, Thor: The Dark World, and Thor: Ragnarok is that he’s brave, determined, and has leadership qualities. He’s always thinking about what’s best for Asgard and its people. I wanted to take that on.”

A lot has been said about the special effects regarding Axl’s initial mental contact with Thor, which we don’t need to rehash, but Dyer said he really enjoyed working with Hemsworth and director Taika Waititi. He said there was a lot of improvisation on set, something he hadn’t really done before.

“On this one, because Taika’s very creative and loves to play around with lines, [we improvised] quite a bit. Mostly when I did a scene with Chris Hemsworth when we were in the cage, we kind of played around with lines then. We went back and forth with the whole you’re in a cage, but it’s okay because if you die, you’ll go Valhalla, like, ‘Oh, my god, shut up’ bit. We played around a lot with that, which was so much fun. It was so much fun to do it with Chris Hemsworth. I mean, it’s Chris Hemsworth. I am such a big fan of his, so I was so glad I got to do that.”

Sounds like this kid has a bright future. Thor: Love and Thunder is currently streaming on Disney Plus. Our review called it “a frequently hilarious, disarmingly charming, and fun-filled superhero romp.”