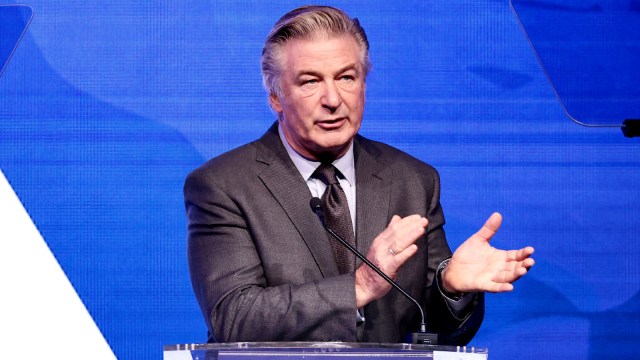 Alec Baldwin and Woody Allen sat down for an Instagram Live chat on Tuesday morning, for some unknown reason, which went as well as one might expect between a 64-year-old man and an 86-year-old man trying to navigate technology under the weight of the massive chips on their shoulders.

It’s unclear why they didn’t just head to a studio or other platform to host their conversation — except just kidding, as obviously, the reasons are not only abundant but actually crystal clear. In addition to the fact that Baldwin is still under investigation for the shooting of cinematographer Halyna Hutchins on the set of his upcoming film Rust, the actor’s career has been marred by public incidents of losing his temper over the years. And then there’s Allen, who has pretty much become persona non grata in Hollywood since the #MeToo movement — which seemed like a long time coming.

The problems started pretty much as soon as Allen logged on, admitting outright that he didn’t know what an Instagram was but that he did have a Facebook although someone handles that business for him. After explaining that Instagram is the equivalent of “Radio City Music Hall for millennials,” Baldwin then inexplicably lamented about the legalization of marijuana, which he said has “everybody just zonked out looking at their phones,” to people watching the conversation on their phones.

All told, Allen only dropped off of the 55-minute-long interview three times during the first half-hour, the first of which caused Baldwin to yell in Spanish at someone offscreen to help with the technical difficulties. “They need to be in a room with like, the best Wi-Fi in the house,” he instructed someone on the phone after the second time.

But in between technical issues, the two men found plenty of clouds to shake their fists at. First and foremost, the state of film today — as Baldwin complained whereas “you used to make an appointment” to go sit in a room to watch a movie with your popcorn, Raisinets, and Dr. Pepper, now people like to watch movies at home where they have the audacity to pause to use the bathroom, make a pitcher of martinis, or make some guacamole. He’s so close to getting it!

Allen, who is shooting his next movie in Paris this coming fall, also admitted to also feeling left behind by the current state of the film industry.

“When I used to do a film, it’d go into a movie house all across the country. Now you do a movie and you get a couple weeks in a movie house,” he complained. “Maybe six weeks or four weeks, and then it goes right to streaming or pay-per-view. It’s not the same … It’s not as enjoyable to me.”

“I don’t get the same fun as putting on a movie and putting it in a movie house,” he continued. “It was a nice feeling to know 500 people were seeing it at the same time. I don’t know how I feel about making movies. I’m going to make another one and I’ll see how it feels.”

We have to wonder if either Baldwin or Allen understand just how much it costs to see a movie in the theater these days, not to mention inflation being a strain on many families’ budgets or people understandably being reluctant to turn to theaters after a very much still ongoing pandemic. Or that audiences still do show up in droves for some movies, just not the ones these guys have been making.

At any rate, the handful of people watching on Twitter understandably had thoughts and questions about why the interview was taking place, why Baldwin appeared disheveled wearing a golf visor, and why he thought his housekeeper could fix Allen’s Wi-Fi connection.

Another user wondered if perhaps there wasn’t maybe another reason for Allen not making many films these days.

Others pointed out some more uncomfortable facts:

Comedian Jake Fogelnest, on the other hand, saw the potential for technical headaches shortly after the pair announced their conversation on Monday.

Baldwin and Allen have a history of working together on the 2012 film, To Rome With Love, but maybe the director will write him in a part for his next movie. With Baldwin expecting his seventh child with his wife of 10 years this week, Hilaria Baldwin, he’s certainly got the mouths to feed.