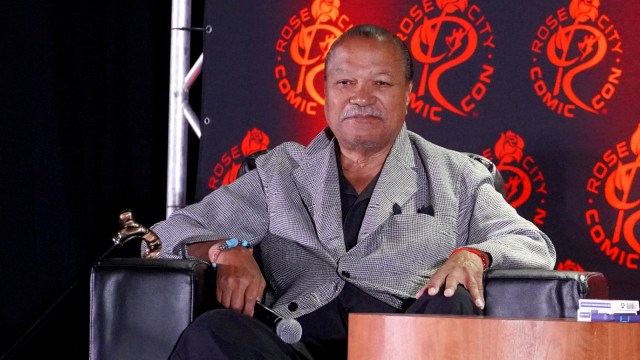 The Empire Strikes Back star Billy Dee Williams is revealing the one person he always wanted to play in a movie — and almost did at one point — in a life and career he describes as filled with very few regrets if any.

“Do you ever regret anything in your acting career or are you glad with where you are right now?” a fan asked Williams at a recent panel at Rose City Comic Con in Portland, Oregon.

“Well, I’ve been very lucky, very fortunate. I’m pretty content with my life and my offerings. Listen, I got a great family. Great kids, great grandkids. I had three wives,” Williams said with a coy chuckle under his breath accompanying that last part of his remark, which sent the fans packing the ballroom into uproarious laughter.

“No. There’s only one character I always wanted to play and came very close: Duke Ellington. I always thought that I was the perfect person to play Ellington.”

Williams went on to describe the first time he met the legendary jazz pianist and composer during a reception for Ellington in New York City when Williams was only 19 years old.

“A friend of mine ran a newspaper in New York, he was managing editor. And he gave a reception for Ellington. And the room was filled with all these ladies. And he was very charming. In fact, I did a lot of research on his life. And one of the things I found out was that he used to compete with his father to see who was more charming. Anyway, when he walked into the room, he made each lady feel like she was the only woman in the room. And I thought that was pretty cool. I took notes.”

During that same panel, Williams talked about his passion for painting that he has courted throughout his life, an artistic medium in which he has become quite accomplished, in addition to starring in movies. Williams even revealed what color Lando Calrissian’s lightsaber would be if the Star Wars character was a Jedi.

Williams revealed during the panel that he’s currently writing his autobiography and plans to release it next year.