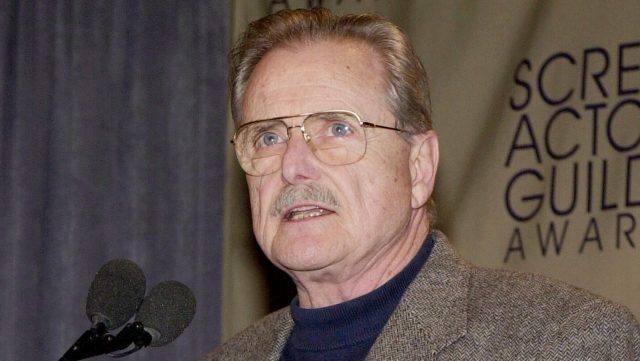 In a heart-warming and feel-good story, the cast of Boy Meets World confirmed the news that we already suspected —William Daniels is a real-life Mr. Feeny.

Will Friedle, Danielle Fishel, and Rider Strong recently spoke with PEOPLE about their new podcast, Pod Meets World, and how intertwined their lives still are with Daniels. He’s been shaping them as people since the early 90s, and his wisdom is showing no signs of slowing down.

Fishel shared that some of her most treasured advice from Daniels comes from his words about a lasting marriage. She also said that he’s a significant part of why the three have grown up together and stayed such close friends.

“His advice was actually just really great for all relationships. He said open communication and honesty and respect. I was like, yeah. I think that’s exactly why the three of us have remained this close over the course of 30 years. So if you’re willing to listen, Bill is dropping gems left and right.”

Friedle said it’s a beautiful feeling, talking to Daniels and his wife and learning from their long and full lives.

“He’s still giving advice. 95 years old and he still shoots out the pearls of wisdom. His wife, Bonnie, as well. Talking to them is still magical.”

Strong has been carrying Daniels’ advice with him since they were just kids on the set of Boy Meets World, and it helped him grow as a person and within the industry.

“When we were kids, goofing off and having a good time, he was very much a Feeny-like presence, even when the cameras weren’t there, in terms of knowing his lines, being a complete professional, being on time. Those were things that we needed to see, and had to learn to emulate in order to be professionals in the industry.”

Fishel stepped in with support for Daniels’ work ethic and how it influenced them in a positive and professional way. Daniels didn’t shower them with advice and how-to checklists for being child stars. He simply supported them on their paths and allowed them to exist without talking down to them or feeling like he had to step in to improve their work.

At the time, Fishel said that she felt like they might have pushed him away, but she sees it now for what it was — something that has humbled her.

“I recognize that it was actually a huge form of respect. That he knew we were professionals, we were going to get it done, we had a different process than he did because we were 12 and 16, or 12, 13, 16, but he was going to let us come to it honestly. I think that’s something that I really learned from him now in my relationships with young actors. I direct for children’s TV almost exclusively now, and I treat them as if they were any other peer or equal of mine. I think I really learned that from Bill.”

Fans of Boy Meets World will be thrilled to learn that they’ll too be able to benefit from the advice of Daniel and his wife as they’ll appear as guest stars on the Pod Meets World show. The first episode of their podcast is available now,