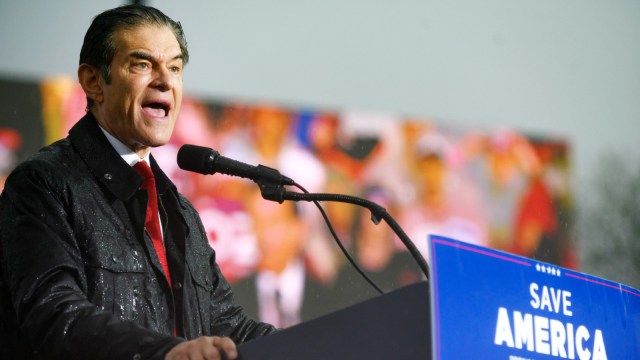 The Pennsylvania senate race between Trump-picked Dr. Mehmet Oz and current lieutenant governor John Fetterman has taken on a life of its own in recent weeks after the former television host went viral over a resurfaced campaign video in which he gave real Lucille Bluth “how much could a banana cost” energy by griping about inflation in a local grocery store.

Naturally, Fetterman used the video as ammunition, and now the Oz campaign has fired back — but somehow only managed to step in it even deeper.

In the original video, which was first posted back in April, not only does Oz misidentify the name of the store as “Wegner’s” (an apparent mashup of Redner’s and Wegman’s, both Pennsylvania grocery chains), but he bizarrely suggested that the ingredients for a “crudité” platter included raw broccoli, asparagus, and carrots, along with prepackaged guacamole and salsa. Because there’s nothing like dipping raw vegetables into … more raw vegetables?

“Guys, this is $20 for crudité, and it doesn’t even include the tequila,” Oz said in the video. “I mean, this is outrageous, and we got Joe Biden to thank for this.”

Much has been made about the fact that Oz is a wealthy, out-of-touch celebrity who does not actually reside in the state in which he’s campaigning to represent in the Senate. So perhaps Fetterman was waiting until closer to November’s election to pounce, as he, in fact did in mid-August. “In PA we call this a … veggie tray,” the six-foot-nine politician quipped.

From there, Oz quickly became the laughing stock of the internet, and a Wegner’s parody account quickly popped up on Twitter, boasting over 25,000 followers in its first week. And it didn’t even have to dig that deeply for content, as you can see in the following video ripped from Oz’s own TikTok account below.

However, this week Oz’s campaign addressed the gaffe as part of a deep dive into his campaign by Insider, and did not exactly help the situation by making light of a stroke that Fetterman had suffered back in May. (He has since undergone surgery to install a pacemaker with a defibrillator.)

“If John Fetterman had ever eaten a vegetable in his life, then maybe he wouldn’t have had a major stroke and wouldn’t be in the position of having to lie about it constantly,” Oz’s senior communications advisor Rachel Tripp told the publication.

It didn’t take long for Fetterman to shame his opponent with the comment. “I had a stroke. I survived it. I’m truly so grateful to still be here today,” he tweeted on Tuesday, along with the Insider headline. “I know politics can be nasty, but even then, I could never imagine ridiculing someone for their health challenges.”

Many others, including Andy Richter, naturally had similar and colorful sentiments directed at Oz, who — let’s face it — definitely deserves the backlash for this.

Not shockingly, many people — some who have even suffered strokes themselves — have come out of the woodwork to suggest that maybe shaming people with medical conditions is not the best way to appeal to voters.

Political commentator Brian Tyler Cohen likewise shared a video from physician and former Pennsylvania senate candidate Val Arkoosh, who fired back: “No real doctor, or any decent human being, to be honest, would ever mock a stroke victim who was recovering from that stroke in the way that Dr. Oz is mocking John Fetterman.”

With Oz currently trailing Fetterman by as many as 10 points in the polls, he’s gonna have to come up with something better than crudités and stroke shaming — as Fetterman continues to run circles around him.