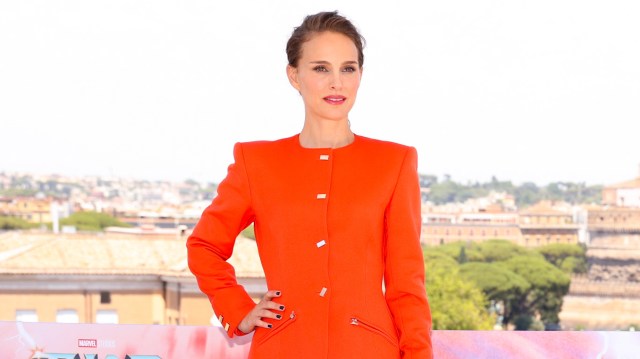 Oscar winner Natalie Portman is adding another skill to her resume: underwear water filter professional. The actress will appear in an upcoming episode of the National Geographic show Running Wild with Bear Grylls: The Challenge, and in a clip shared by People, she can be seen mastering the art of procuring clean water using your skivvies.

In the clip, the pair find a pool of questionable water and because Grylls is no stranger to drinking questionable liquids (AKA his pee), he tells Portman that they are of course going to drink it.

“This water is really full of loads of dead flies and dirt and everything,” he said. So they scoop the water into some flasks but now the age old question of how to filter it comes into play.

“We could use a sock, but then again, you kinda need your sock,” he said, before suggesting his unmentionables.

Because he’s definitely done this before, Grylls cuts his Calvin Klein waistband and removes his underwear without taking off his pants.

“I mean it’s not going to be perfectly clean,” he said. “That’s an understatement,” she replied.

While he starts the process of filtering, Portman does her best incredulous face.

The video is the first from Grylls new show, which takes celebrities and teaches them “essential survival skills that they will have to master and then prove they can use in a high-stress situation.” In a press release, National Geographic said each celebrity will learn key survival skills.

“This season, guests will not only be pushed physically and mentally — like plunging into a frozen lake in the Canadian Rockies or foraging for food in the deserts of the Great Basin — but Bear will be testing each on their survival skills. This time, they will be tested beyond other guests: after Bear teaches each of them a key set of skills, they will then have to master them on their own and deploy those skills at a high-intensity moment to earn their extraction from the wilderness.”