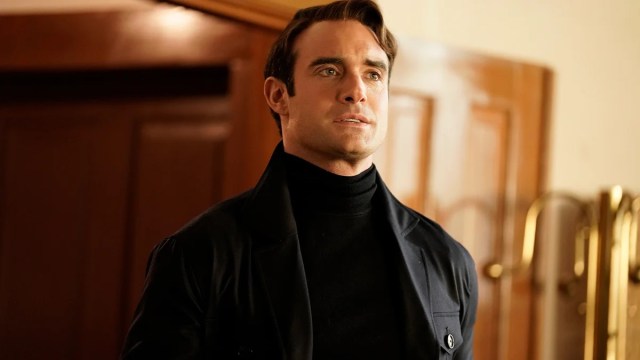 The edge-of-your-seat storytelling, combined with the incredible talent of the cast, sets Monarch up to steal the scene as the network rolls out its fall season. We Got This Covered had the opportunity to speak to Sasse about the drama, his character Luke, and the intricate way the series came together behind the scenes, and in front of the camera.

Hi Joshua, thanks for taking the time to chat with us today! First — tell us a little about your upcoming series, Monarch; we’re getting Nashville meets Yellowstone (with the family dynamic) vibes from it.

Hi, you’re so welcome! I would say it’s got more Succession vibes than Nashville – we use music differently in our show, I think – but it’s definitely got those high stakes that Yellowstone plays on, just substitute the horse-wrangling for music – the music in this show is something else, we can’t wait for people to see it.

What initially drew you to Monarch?

I always try and make sure each job I do is a new experience – I’ve tried really hard over the years to not fall into playing a stereotype. One of my hobbies is accents, and you actually don’t get a lot of opportunity to do a Texan accent, so I was really excited to play with that – I think whenever a musical show comes around in the business, it passes my door, but this was on a different level because we don’t break the fourth wall and it’s so gritty, so I was really keen from the outset.

You’re all so multifaceted and talented. Did you learn anything from your co-stars on the series? Who were you most surprised by?

Thank you – I’m not sure I’ve earned that alongside this cast yet, but we’ll see, I suppose – I never thought I’d be acting alongside Susan Sarandon, put it that way. I’ve always preferred working with older actors; maybe that’s selfish of me because you saturate their experience and learn all the time. Both Trace and Susan have this innate stillness in them when they perform, and I am so drawn to that, though they do it in very different ways.

Trace is a phenomenon – being in a scene with him isn’t acting; its survival; Trace doesn’t act – he just is – so you have to be completely present and completely ready to go wherever the moment takes you, and that is the love I found for this job when I started in the theatre, it’s what I’d imagine dancing with a tiger feels like. But Susan is…it’s just effortless talent. She has this extraordinary energy about her that lends itself to whatever emotion she’s playing, and technically speaking, she’s a master – and she does it all so gracefully like it’s the easiest, most natural thing in the world – it was such a privilege working with her.

Your character Luke is the son of Albie and Dottie; how did you frame the dynamics of your family for the series?

My main focus was the power struggle that ensued between Trace and I. Being Dottie’s favorite child, only son, and [the] middle sibling, gave me a lot to work with. A huge amount of the plot relies on that dynamic, so we spent a long time mapping out our family history and making specific decisions based on that mythology. Everything had to feel as raw and honest with the characters as possible because the stakes are relentlessly so high, and that definitely needed mapping, so we didn’t give too much of the tension away too soon. That was something the whole creative team worked on over the whole season.

If you could describe the series in three words, which would you use?

Is there anything you hope fans take away from your character, Luke?

I don’t know how to answer that. I remember Anthony Sher saying you should never get naked as an actor because then you don’t control where the audience looks — that always captivated me because as an actor, it is your responsibility to tell the audience the story — and that relies on your ability to manipulate their attention in a way that you feel best serves the text. When I see films and shows I love, it’s because I forget I’m watching a show — I hope I’ve served the text in that way; that’s the goal.

The series’ first episodes have already begun airing, and fans are enjoying the ride so far. The show is as much about music and superstardom as it is about family struggles and the secrets we keep.

Sasse’s insight into the series, those three words he picked to describe it, and his dedication to each character he portrays mean fans are in a real treat as Monarch continues an exciting season through the fall. You can catch new episodes Tuesdays at 9 pm on FOX. Here’s to interesting family dynamics, country music, and exciting power plays; we just can’t get enough.