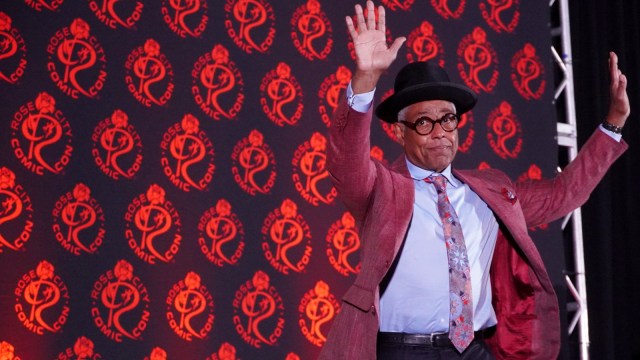 Giancarlo Esposito teased details about his forthcoming new show for AMC, Parish, saying the character he plays has a bit of a badass streak while also indicating the show is currently filming in New Orleans.

During a Q&A fan panel at Rose City Comic Con in Portland, Oregon, Esposito remarked about how much he loved playing the Tom Neville character from the short-lived post-apocolyptic science fiction show Revolution, which aired on NBC from 2012-2014 for two seasons. Esposito agreed with a fan’s assessment that Tom was a “badass,” though the actor declined repeating the profane portion of that moniker. “He just was,” Esposito said.

Esposito went on to explain that he often thinks about Tom, even while filming his new show, Parish, which is a remake of the 2014 British crime drama The Driver that is slated to premiere next year on AMC and AMC+.

I think of him now because I’m doing a show called Parish for AMC in New Orleans. I go back there after the Emmy’s on Monday night to go and begin our sixth week of shooting. And I’m playing a character who I feel has some of Tom’s….some of Tom in him. He’s not…he’s an everyman so he’s not as up the ladder as Tom. Tom is a shapeshifter. That’s a great show, you should see it.

With decades of acting credits to his name, Esposito is one of the most in-demand stars of his generation at the moment. Having just wrapped playing Gus Fring once again in the Breaking Bad prequel Better Call Saul, and portraying the main villain Moff Gideon in The Mandalorian, the Disney Plus series set in the Star Wars universe, Esposito’s roles don’t appear to be slowing down any time soon.

Still, there’s even more roles Esposito said he’d love to have on his horizon one day. During that same Q&A panel in the Rose City, Esposito said he’s still open to playing the fan-requested role of Professor X if Marvel is ready to have such discussions. Esposito also indicated he’s game for returning for a Gus Fring-centered Breaking Bad prequel, should Vince Gilligan have it in him to craft such a show.