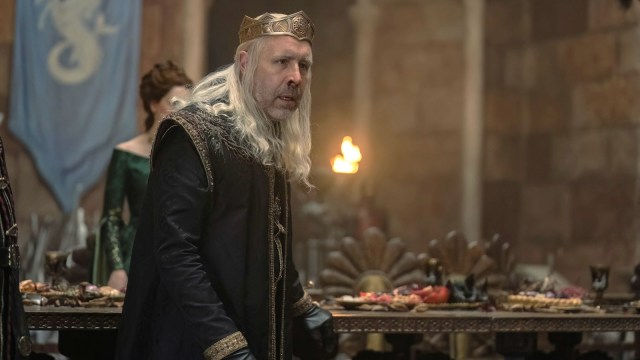 After 73 episodes of Game of Thrones and five episodes of House of the Dragon one thing is abundantly clear: It ain’t good to be the king (or queen). If you even get through the complicated “game” of poisoning your in-laws and manipulating your underlings into supporting your bid for the throne, sitting on it seems even less comfortable than a chair made out of knives. And no one gets that like King Viserys I Targaryen. But his fans have at least found a way to sympathize.

Bless Viserys’ heart but it seems the man can’t end an episode of the series without being somehow worse off than he was when he started. One can only hope that the several years he spends offscreen between episodes are filled with a lavish amount of downtime, for all his onscreen moments are rife with arguments, potential, betrayal, incurable illness, and far more blood than fire. Five episodes in, and its no wonder he constantly seems on the verge of collapse.

And fans have found the perfect way to illustrate how the man must feel at the end of the day, encapsulating the Viserys Targaryen spirit in none other than the best Ben Affleck meme in existence, Smokin’ Ben. The hard-working forces of the internet have helpfully dressed Affleck up in the robes of state and the crown of Westeros to further the resemblance to Viserys. And given both Affleck and Viserys actor Paddy Considine’s affection for facial stubble, the likeness is actually fairly spot on.

The online memesters really manage to capture the essence of the beleaguered King of the Andals and the First Men. Here’s hoping he gets some rest before next week’s episode tosses him right back into the royal intrigue meatgrinder again.