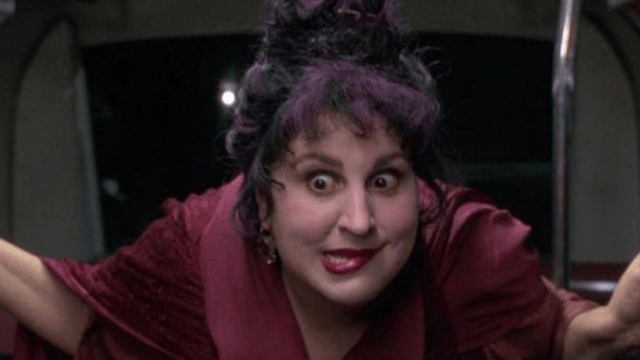 Gather round sistas! Hocus Pocus 2 is finally here, and we feel like we’ve been waiting for our entire lives, and to some degree, we almost have!

Returning to Salem and seeing our favorite witches again was exciting, and if you’ve already seen the film, you might have noticed something different about Kathy Najimy’s Mary Sanderson. The quirky turn of her mouth appeared on a different side of her face!

Speaking to EW, Najimy explained the quirky half smile being on the other side of her face for the following reason:

“It’s on the other side mainly because it’s so hard for me to do it on the side I did it on 30 years ago. I’m sure the fans are going to go into deep detail about why it’s on the other side. It’s just something I came up with the first week. This is a big comedy, so you don’t have to be subtle or have a 40-page Shakespearean backstory.”

She also explained that it could be explained by a hilarious turn of events that involves another snarky Sanderson sister.

There’s also the very true story that the Sanderson sisters are witches, which means they practice magic. Mary’s mouth can be on whatever side of her face she feels like, with the turn of her nose or the quick reciting of a spell. It could also happen if one of her witchy sisters decided to cast a spell on her without her knowledge. The possibilities are truly endless.

You can watch Hocus Pocus 2 streaming now on Disney Plus, and it’s a nostalgic adventure on Halloween that you won’t want to miss.