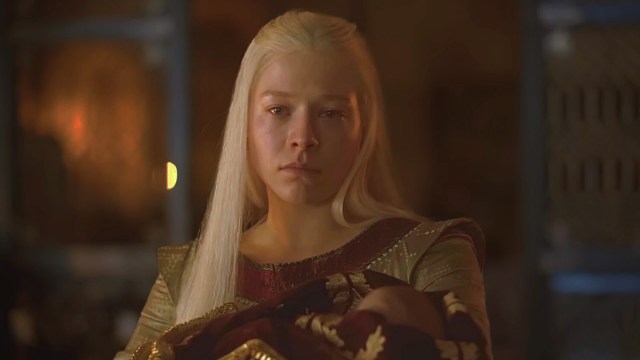 House of the Dragon is at a show-defining crossroads right now, with Emma D’Arcy soon picking up the mantle of Rhaenyra Targaryen from Milly Alcock while Olivia Cooke does the same for her counterpart Emily Carey. We can hardly recall another television show whose main leads changed as early as the second half of season one, but that seems to be the way HBO wishes to handle this jarring 10-year time jump in Fire & Blood.

Fortunately, Emma D’Arcy and Olivia Cooke’s co-stars Matt Smith and Paddy Considine have nothing but praise for the forthcoming talent, so at least we know the characters we’ve grown invested in over the past few weeks are in safe hands. At any rate, here’s everything involving the world of Westeros over the past day or so that needs going over.

Rhaenyra’s character arc from a reluctant princess to a desperate contender for the Iron Throne, explained

When audiences met Rhaenyra first, Milly Alcock portrayed a generic princess too pure for the twisted world she found herself in, but as the show progressed and the heir to the Iron Throne came face-to-face with the grim reality of her situation, the character evolved from a reluctant member of royalty to a dangerous contender for the Iron Throne. We still don’t know why Rhaenyra continues to fight as fiercely as she does in the story. Maybe it has to do with survival. Maybe it’s about the responsibility his father Viserys passed onto her. Whatever the answer, Rhaenyra has gone through an awfully character-altering journey, and you might find it interesting to read a thorough breakdown of her arc in this latest article from around the Westerosi circles.

Even if they’re willing to go into the next episode with open minds, viewers will still retain a certain degree of subconscious reservation about Emma D’Arcy and Olivia Cooke just randomly replacing their predecessors and the show taking a whopping 10-year time jump. But if Matt Smith (Daemon Targaryen) and Paddy Considine (Viserys Targaryen) have anything to say on the matter, the transition will play out brilliantly. “It gave you a completely different context for the age thing to play off,” said Smith, when addressing the jump in a new interview.

House has already burned through half of its first 10-episode run, delivering many intense and memorable moments that will no doubt be talked about for years to come. And yet, HBO really wants you to know that the second half will be just as blood-pumping, if not more. In the show’s latest trailer, chaos winds through the king’s domain as the political players start manuevering for more power. Viserys is growing more fragile by the episode, and Daemon still hasn’t forsaken that romantic fling with her niece Rhaenyra. The Targaryens are essentially lending a hand to their own downfall, ever so unwittingly, but as sure as the setting sun of old Valyria.

Be sure to stay tuned for more updates on the Seven Kingdoms at the same time the prequel show returns tomorrow with its sixth episode.