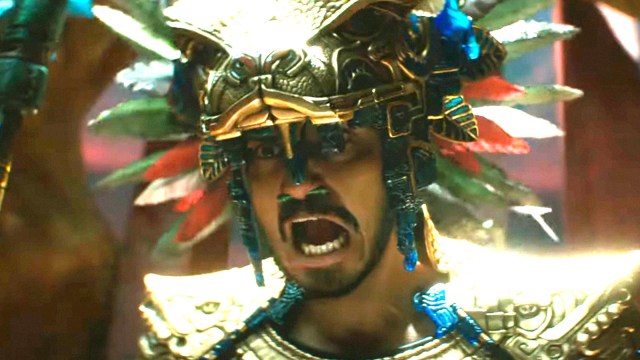 With the review embargo having been lifted, the first reactions to Black Panther: Wakanda Forever are now out there—and thankfully they could not be more positive, with the critics heaping praise on Ryan Coogler’s movie. And yet social media has been flinging scorn at the sequel today, thanks to the latest promo unveiling a disappointing character design. Elsewhere in the Marvel universe, a sexy civil war is raging between the armies of two Avengers.

The wait for Wakanda Forever has felt like, well, forever, but finally the film is almost here. And it seems our patience has been worth it as the first reviews are calling it an emotional masterpiece that doesn’t disappoint. To prove it, the flick has opened to an almost flawless critics score of 94% on Rotten Tomatoes. Obviously that figure is going to fluctuate a little as more reactions come in, but that’s certainly a great starting point for what could easily be the most well-received entry of Phase Four.

… But a new look at a new hero inspires scorn

And yet while Rotten Tomatoes is showering acclaim on the film, the folks on Twitter are throwing metaphorical rotten tomatoes at Black Panther 2 in the wake of our first full reveal of the MCU’s latest hero, Ironheart. There’s a lot riding on Riri Williams, as Dominique Thorne’s new addition is soon to get her own Disney Plus series. But the internet isn’t a fan of her Ironheart armor, with literally everyone negatively comparing it to a Power Rangers costume. That’s not the power move we were hoping for.

Forget Secret Wars, as this Tuesday has seen Marvel fans go head-to-head in the “Sexiest War.” America’s Ass Chris Evans has been awarded the coveted title of People‘s Sexiest Man of the Year, inheriting the honor from another Avenger—America’s Ant Paul Rudd. And while people are pleased for Evans, there are still Rudd reactionaries out there who don’t want the unaging Ant-Man star’s era of wearing the crown to end. What is this, some horndog version of House of the Dragon?

Good news! Daredevil: Born Again looks to be remaining authentic to the Netflix series in at least one major way. According to the latest production intel, filming will take place in New York City, as opposed to Marvel’s usual home of Atlanta. Add that to Vincent D’Onofrio’s curious sharing of a classic Kingpin scene, and it’s looking like the Disney Plus revival will deliver all that fans hope. Now we just need Deborah Ann Woll to be confirmed to be returning as Karen Page.

Shimmy yourselves back here on Wednesday, Black Panther admirers and antis, for more Marvel news.