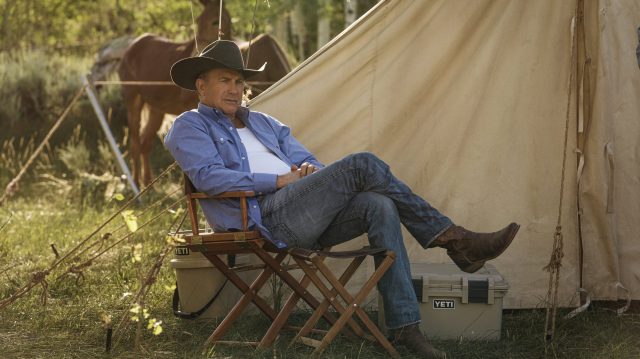 Happy Friday, Yellowstone fans, we’re just two days away from the third episode in season five of Paramount’s number-one series, and we can’t wait to see how the story unfolds. With John Dutton sworn in as the hesitant new Governor of Montana, the lives of everyone around him quickly changed. There are big decisions to be made, meetings to be had with equally as uncertain friends (do the Duttons even have friends outside the ranch…we digress), and hopefully a lot more of Beth and Rip doing, well — anything. In today’s news, Kevin Costner is making fans very emotional as the official Yellowstone Instagram account is asking for more Rip and Beth, too; oh, and the bunkhouse boys are talking about that epic season premiere scene with the wolves. You know the drill from here, grab your Yellowstone-loving bestie and your drink of choice and let’s ride in.

Kevin Costner is making us emotional

Kevin Costner is the host of Fox Nation’s upcoming docu-series, Yellowstone: One Fifty, and the experience will be both educational and emotional for viewers. Longtime fans of Costner know that he’s felt a draw to the western lifestyle since he was a child, but he opens up more about the experience of hearing the word Yellowstone as a child and immediately recognizing its vastness.

Of course, he couldn’t have known then that he’d be the leading man of Paramount’s number one series, Yellowstone, as patriarch John Dutton. While the series certainly brings him face to face with that lifestyle and the beauty of the mountains, rivers, and animals that inhabit it, his latest project isn’t a scripted series. He will explore Yellowstone National Park as they did 150 years ago. We see a cold but excited Costner in a tent as he talks about walking where pioneers walked and having a deep desire to experience what they did, to see how it changed them.

Perhaps the most emotional statement comes from Costner, who explains that he sometimes thinks about the future when he’ll need to “walk away” from it all. He takes a breath before talking about what he’ll miss most, and it seems that his experience in Yellowstone has really impacted that.

“Sometimes I think about the things I’m going to miss most in my life when I finally have to walk away, and sometimes it’s not just my family that I’ll think of, but it will be the books I never read. It will be the music I never hear. And sometimes the stories that I wish I would have known.”

Being somewhere so stunning and experiencing how Yellowstone is larger than life most certainly impacts one’s way of thinking, and we can’t wait to watch Costner as he navigates the experience.

The bunkhouse boys are talking about that scene with the wolves

The bunkhouse boys are back again and talking about that scene in the season premiere that will undeniably impact the series’ future. One of the things that happened to sort of drive the storyline forward was that the ranch hands killed wolves that were harming their livestock.

As we’ve said before, it’s never easy to see an animal killed, but it does happen from time to time in the series. It’s never done tastelessly or without concern for the situation (even though it’s not actually unfolding), but this situation was slightly different.

The next morning, the ranch hands discovered that the wolves belonged to the national park; and things got hairy. The bunkhouse boys describe the experience and what it might mean for the future.

“‘These wolves have Facebook pages, people walk around with t-shirts with their pictures on them,’ Ryan says, and he and Colby soon realize they’re swimming in hot water. The fact hits home once more when Rip asks them why they shot the ones with collars on.”

Ian Bohen and Denim Richards describe the scopes they used on set, and they were both wowed by them and slightly creeped out with how well they could see. Jefferson White, whose character Jimmy is in Texas at the start of the season, also mentions that they had to be extra careful because they were the trained “actor” wolves (60% North American Grey Wolf mixed with another species of canine), and there were also wild wolves all around the area.

We’ve yet to see the fallout of the situation, but we’re sure it won’t be long now. Everyone wants a piece of the Yellowstone, and they’ll do anything to get it.

They also played a rousing game of would-you-or-wouldn’t you where Bohen asked questions to Richards and White, one of which was: Whose chair would you never sit in on set? Of course, no one would dare mess with the man’s chair himself: Costner’s dwelling place on set is rather sacred, after all. White was quick to say, Cole Hauser, while Bohen said Kelly Reilly. You just don’t disrespect a person and their chair.

Everyone wants more Rip and Beth

Yellowstone shared a series of images of Beth and Rip from the season five premiere, and all we’re getting out of them is that everyone is waiting for more moments with our favorite television couple. They are the couple that we all root for, the characters who have experienced pain in the most detrimental ways and somehow survived it to come together and still believe in love.

Rip saw his father take his mother’s life as a child; he then took his father’s life because of it. When John found out, he brought the scared pre-teen to the ranch to give him another chance. That’s when he crossed paths with John’s daughter, Beth, and the two began a decades-long love affair. It hasn’t been all sunshine and rainbows between the two of them; in fact, a lot of it has been painful.

Beth frequently pushed Rip away, keeping her walls up so that he wouldn’t get close enough to hurt her, but Rip assured her that he was there, waiting until the day she figured out she didn’t have to fight them anymore. Beth might not believe that entirely yet, but she did ask Rip to marry her in one of the most heartwarming episodes of the series, and in the finale of season four, the pair were wed.

Season five starts off with a sense of newlywed bliss, but it’s not what you might anticipate for yourself. Yes, they’re married, but that doesn’t mean they’re running off to experience nothing but joy for the rest of their lives. No, their marriage signifies the love that life requires us to share to make it through. They provide comfort for one another, passion (fiery, fiery passion), and a place where they can feel safe; it’s all anyone could hope for.

So here’s to more Rip and Beth in season five and many seasons to come.