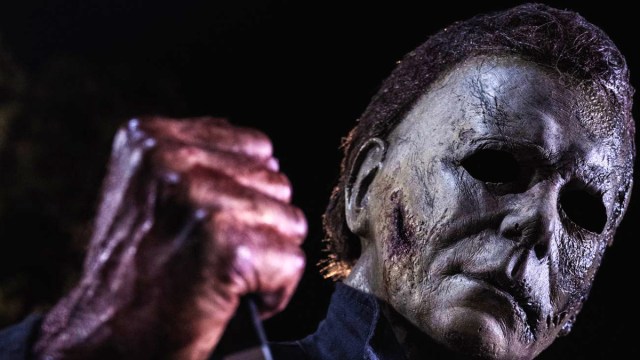 It’s the most spine-tingling time of the year, and we’re surrounding ourselves with all things terrifying as we ride out the second half of October. Spooky season is a year-round thing for some of us, but there’s something extra special about diving into horror in a month devoted to being frightened.

With Halloween Ends in theaters and streaming on Peacock, people can’t stop talking about Michael Myers. He’s a staple of the spooky season; his movies are called Halloween, after all. His crime spree takes place on the one night a year when we’re supposed to embrace all things terrifying as we are greeted by people hidden under masks. When you think about it, it’s the most unnerving type of fear: being surrounded by people without knowing which masked evil hides a real one beneath it.

It’s not just Myers that has a frightening mask, either. Villains like Ghostface, Jason, Jigsaw, Sam, and those terrifying “strangers” from The Strangers — a film we’ve only been able to sit through once; all strike a profound fear within audiences worldwide.

As two of our favorite masked slashers, we’re looking at Ghostface and Myers today. Both are maniacal, terrifying, and unsettling, and they’re both working on a pretty high body count.

One killer has four times the victims of the other, so which blood-thirsty knife-wielding maniac has the most kills? Follow us upstairs as we painstakingly avoid the car that we could drive to safety as the masked madman himself is chasing us, and we’ll fill you in on all the details!

Who has donned the Michael Myers mask?

Several actors have taken on the role of Michael Myers across the last five decades. Nick Castle in 1978 and 2018’s Halloween — Castle is iconic as the first person to wear the infamous mask. He also filmed a cameo for Halloween Kills, as reported by Collider, but the scene isn’t in the theatrical release.

Tony Moran in 1978’s Halloween — Moran’s face is the unmasked face viewers see when the Myers mask is removed.

Dick Warlock donned the mask in Halloween II, while George P. Wilbur became the madman in Halloween 4 and Halloween: The Curse of Michael Myers.

Don Shanks plays Myers in Halloween 5: The Revenge of Michael Myers as Chris Durand took on the mantle in Halloween H20: 20 Years Later.

Brad Loree became Myers in Halloween: Resurrection, while Taylor Mane wore the mask in Rob Zombie’s 2007 remake and in the 2009 sequel, Halloween II.

James Jude Courtney wears the mask in 2018’s Halloween in most of the film, with Castle only appearing in one scene. Airon Armstrong plays a younger Michael in Halloween Kills, the latest installment of the Myers slasher spree.

This article shows even more actors/stunt workers who have worn the mask through various scenes and filming projects across the Halloween franchise.

Which killers have worn the Ghostface mask?

As fans of Scream are aware, the first killer to don the Ghostface mask was actually the duo of Stu and Billy, played by Matthew Lillard and Skeet Ulrich. In the slasher fandom, several fans say this is where they got their affinity for “bad boys,” and we agree.

Next in line was Nancy Loomis and Mickey Altier, with the latter being sort of “recruited” to help play the role of Ghostface alongside Billy’s mom. Of course, his mom wanted vengeance for his untimely death, so she began cooking up the slasher spree. Nancy Kyes and Timothy Olyphant played Nancy and Mickey, respectively.

In Scream 3, Roman Bridger donned the mask of the killer, and Scott Foley played him.

The latest installment saw Amber Freeman and Richie Kirsch wear the Ghostface mask. Mikey Madison and Jack Quaid played the killers, and their charcters were very easy to loathe.

What slasher has the most kills?

Don’t worry; we didn’t forget about the question that brought you here. What killer is officially the most maniacal in their kill count? The totals are vastly different, but their style is quite similiar. Both are happy to slash you open with a knife, but Ghostface is quicker to rely on other methods if necessary.

Over the course of all Halloween movies, Myers has killed at least 139 people — yikes!

Throughout all of the Scream films, Ghostface has a victim count of 30. While the masked slasher is well behind Myers, there’s still time to catch up — and that number will soon get higher with Scream 6.

If we had to pick a winner here, the clear victor is Michael Myers, but we’re suckers for Ghostface too. Both masked killers are not people we’d like to meet in a dark alley (unless it was Skeet Ulrich, but we digress).

Happy spooky season, everyone; here’s to the relentless slasher nature of both Michael Myers and Ghostface.