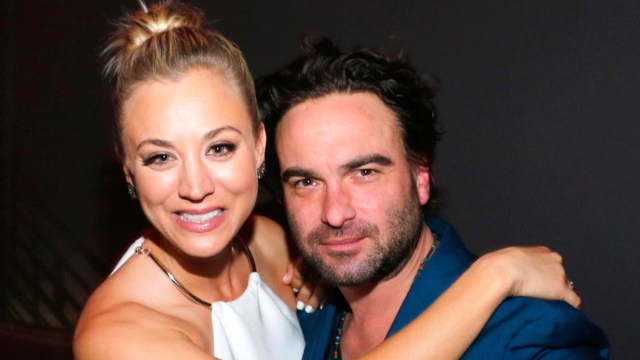 As far as TV romances go, Penny and Leonard of The Big Bang Theory were definitely a fan favorite, and as far as Hollywood romances go, the real-life love story of their actor counterparts, Kaley Cuoco and Johnny Galecki, was equally adorable. So how did these two lovebirds take their romance from on-screen to the real world and back? We have the dish and are going to share it with you. Here is some of the backstory of the duo’s enduring love for each other.

Penny was played by Cuoco, who got her start as Bridget on 8 Simple Rules. Leonard was played by Galecki, who the world fell in love with for his role as David, Darlene’s boyfriend on the hit show Roseanne. They met on the set of The Big Bang Theory as their characters — the nerdy, shy Leonard and the outgoing, beautiful Penny — quickly developed a connection. The characters were complete opposites, which only made their story all the more charming. Before long they were falling in love, both on and off-set. Cuoco and Galecki dated exclusively from 2008 to 2010 but even before they got together in real life, the two report there was “always something there.”

According to an interview with Vanity Fair, Galecki and Cuoco revealed that when their characters shared their first kiss on set was around the time they realized that things might be brewing beneath the surface in real life. Aww! The episode was “The Middle Earth Paradigm” and Penny was dressed as a sexy kitten for a Halloween party, and when her ex-boyfriend showed up, Penny ended up kissing Leonard. It was the pair’s first kiss, which means it was also Cuoco and Galecki’s first kiss, captured forever on camera. Adorable.

They were beginning to realize there was more between them than just platonic coworkers, but the elevator shaft scene in “The Nerdvana Annihilation” episode clinched it. The episode features a dream Leonard had where he rescues a trapped Penny from an elevator shaft. The episode required the pair to be wrapped in each other’s arms for an extended amount of time. Cuoco reveals in the Vanity interview, “I think we fell a little in love in that elevator shaft.” We’re not crying, you are.

In fact, the moment was so picture-perfect, a photo of it lived on Cuoco’s fridge for quite some time. But they didn’t officially start dating until sometime later, after Cuoco and her then-boyfriend broke up. Cuoco met up with Galecki for dinner one night and the evening ended with a kiss, and maybe more.

Although they tried to keep their relationship a secret, eventually it got out, despite some crew members having concerns about it. But despite worries it might interfere with work, if anything it seemed to bring a special sense of magic to the show. Penny and Leonard’s love for each other was palpable, and no wonder, the people behind the characters were in love too!

Even after they went their separate ways, their close connection remained and their friendship was cemented. “He was front row at both of my weddings,” Cuoco reported, “and we’ve been so supportive of each other ever since. We adore each other.”

It sounds like the pair’s friendship isn’t going anywhere anytime soon and we love how it has endured throughout the years. In fact, Cuoco just announced her pregnancy with her boyfriend Tom Pelphrey and we are sure “Uncle Johnny” is going to be front and center for the birth of the little girl.