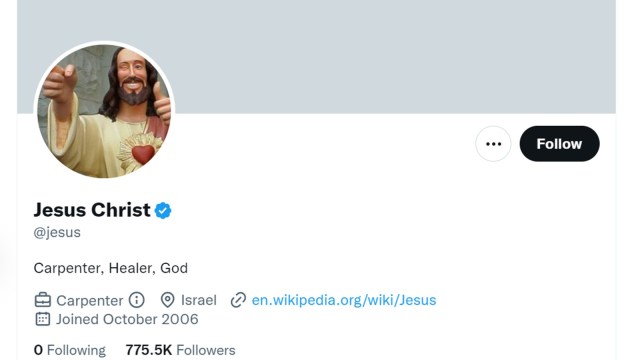 Jesus Christ is now verified on Twitter, whatever the hell that means.

We went on the profile for @jesus just to ensure O’Sullivan wasn’t some imposter himself pulling our collective leg with an elaborate hoax, and sure enough, Jesus Christ was indeed verified.

“Who has two thumbs and verified?” the account tweeted.

While re-tweeting a post from Twitter owner Elon Musk clarifying his new rule that all impersonation accounts must be clearly labeled as a parody, Christ wrote, “This is a parody.”

And of course, other Twitter users soon pointed out how prolific apparent imposter accounts really are, if one person’s screen capture of “the Pope and Martin Luther” is to be believed.

When it comes to the Pope impersonator, it seems that the account was suspended, since the @RealPontifex handle said as much when we checked the profile.

If that weren’t enough, some people were apparently making some impersonator accounts of public figures who are still alive and kicking, such as Meta CEO Mark Zuckerberg, former President George W. Bush, and former U.K. Prime Minister Tony Blair.

The Tony Blair parody account, @MPTonyBlair, was suspended when we checked. As were the parody accounts for Bush (@GeorgeWBushs) and Zuckerberg (@JoeahVR).

With Jesus’ account still up and running, and other accounts receiving the ax, it all makes it unclear whether the anti-parody account policy is truly being enforced uniformly throughout the platform. For instance, H3H3’s Ethan Klein was suspended on Twitter for parodying Elon Musk with his account, even though he did note multiple times that it was a parody. Klein had notated that the account was a parody in his header image and in the bio section, and made a post saying as much, just not the main profile name. By contrast, Christ’s Twitter account — which has not been suspended — is not labeled as a parody in the bio, header, or profile, but he did tweet that it was a parody.

All of this comes after Musk took over as Twitter’s new owner last month after purchasing the social media platform for $44 billion, after which he has made a number of policy changes and reversals in a seemingly knee-jerk manner, such as implementing a paid subscription called Twitter Blue in order to receive the coveted blue checkmark.