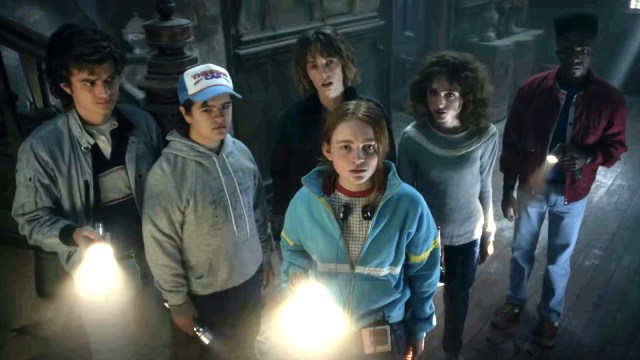 Stranger Things was a huge success with tons of memorable moments, and a great story, as well as brought newfound success for singer-songwriter Kate Bush. However, according to Netflix, season four could have received more episodes if it wasn’t for the COVID-19 pandemic.

According to Deadline, Netflix Co-CEO and chief content officer Ted Sarandos admitted that the pandemic has impacted additional production costs. Around $17 billion was spent to produce content on Netflix this year. And while that is a large sum, COVID costs took around 5 to 10 percent of its content budget. As Sarandos remarked,

“If you did that all again and took that off the top you might even get a couple of extra episodes out of it.”

“[Stranger Things] was probably affected as any [by COVID] because of the young cast and the size and scope of the production and the multiple locations that we shot in. It was a very expensive burden on the show to make sure that we could deliver it. One of the catalysts of splitting the season was how long it took to produce that show and a lot of that was stalled because of early shutdowns of the production and being extremely careful with the cast of the show, early on in COVID,”

It was predicted that season four of the Netflix hit could have received a total of 11 episodes instead of the nine that it currently has. Since the final episode’s release, a few fans believed that the finale was rushed due to the “two days later” time skip and a few loose threads they’ve noticed in the show.

But regardless, Stranger Things Season five has been confirmed by the Duffer Brothers, saying that it would be the final season in the franchise. And while it is unknown when it’s going to be released, hopefully the show will garner a larger budget in order to produce an epic series finale to close the story of the town of Hawkins. But with Netflix reported to have lost an extra 1 million subscribers in the second quarter, and the streaming platform cracking down on password sharing, only time will tell if the show’s next budget will impact the quality of the series finale.