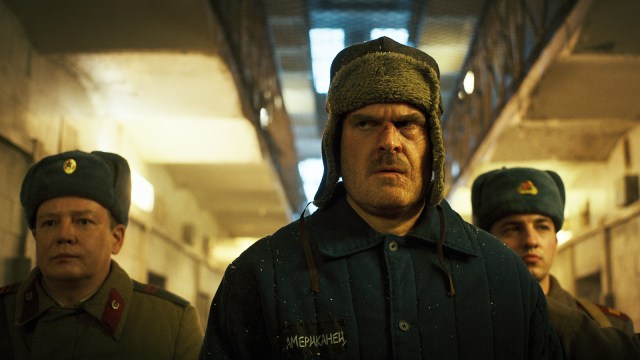 Netflix’s sci-fi phenomenon Stranger Things dropped plenty of jaws during its action-packed fourth season. But, it appears as though star David Harbour’s unbelievable transformation is rightfully stealing the spotlight — and, unapologetically, fans are thirsting over him in the process.

Over on Twitter, user @StrangerNews11 posted a stunning side-by-side example of Harbour’s transformation from his portrayal as Jim Hopper in season three compared to season four. And while we absolutely adore season three Hopper — complete with his cuddly dad bod and wild hair — we cannot help but fawn over his new shredded physique. You can check out the photos for yourself down below:

Despite the general appeal of the new look, Harbour recently revealed in an interview that the overall weight loss process took a serious toll on his body. According to Harbour, he lost almost 100 pounds over the two seasons and was placed on a strict diet method. And while some Stranger Things fans have speculated that season five could see Hopper even more shredded than before, Harbour insisted that he feels more comfortable never going through the fasting process again.

For now, eagle-eyed viewers and Hopper stans can sit back, relax, and enjoy Hopper’s chiseled figure before the fan-favorite dad bod makes its long-awaited return — after all, that’s what made Joyce Byers fall in love with him. Either way, Jim Hopper is a permanent staple in the hit series, and will remain one of the most beloved characters.

Stranger Things is available to steam worldwide on Netflix.