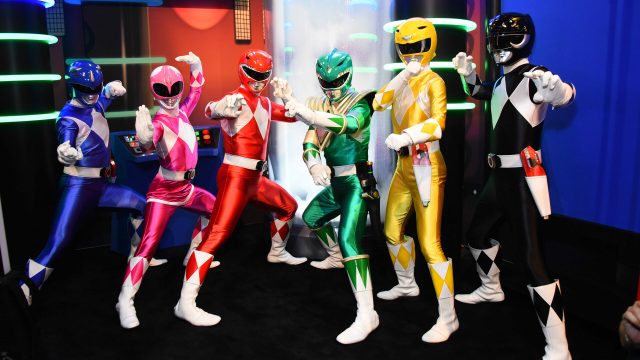 If there’s something strange in our neighborhood, we all know to call the Ghostbusters. After a rescue mission at a restaurant in California, we now know that if we see someone being attacked, we need to signal for an unlikely but mighty group of heroes: the Power Rangers.

ABC7 News reports that at Noka Ramen in Oakland, a staff dressed up as the Power Rangers jumped into action when a woman frantically ran into their restaurant. She was trying to escape a man chasing her, but he quickly caught up and placed her in a chokehold in the middle of the eatery.

A patron at the ramen restaurant told their Twitter followers what seemingly happened next: Power Rangers assembled to protect the woman and get the man out of their store while keeping the rest of their visitors safe.

Noka Ramen is a Thai-owned restaurant that serves a mean cocktail called the Noka Ranger, which explains the colorful and heroic outfits of choice. They explained that the woman said she was unsafe and didn’t want to leave with the man who had her in a chokehold (as expected). He was asked to go, and instead of admitting defeat, he began swinging at the black and yellow rangers.

What happened next almost feels ripped from an old episode of The Power Rangers.

The man threw racial slurs at the staff as the yellow ranger grabbed him by the collar to pull him out of the store, and as if to add injury to insult, he attempted to swing his arms to hit the hero removing him from the ramen joint.

The assailant wasn’t done yet, and the Twitter user continued their story by informing anxious readers that the attacker had returned with a friend. It still wasn’t his lucky day as more rangers began to assemble. The villain and his friend tried to pick a fight with the restaurant staff as they worked to keep him out of their establishment and keep the visitors safe.

Everyone in the restaurant was likely running off of adrenaline and shock, but it began to wear off when the restaurant-goer explained that they told the host they were going to pay for their meals (amid the chaos, diners were told their food would be comped) and that they planned to leave a big tip. The hostess began to shake, and it wasn’t much longer before police showed up, and the beginning of the end ensued.

The man had gone to pick a fight somewhere else, everyone in the establishment was safe, and the green ranger said aloud that the costumes were just on a “test period” at the time.

When all was said and done, the Twitter user said there was no rhyme or reason for sharing the story except to be thankful that nothing escalated further. Others on social media were anxious to find out what the heroes looked like, and a follow-up Tweet shows the heroes outside of the restaurant and allows us to see the faces of the team that jumped into action without missing a beat.

While the staff was humble about the experience, we’re shouting a nod of praise for their quick action and heroic nature. Dressed as Power Rangers or not, their selflessness saved a woman, and likely others in the restaurant, from what could have been a very different end to this story.