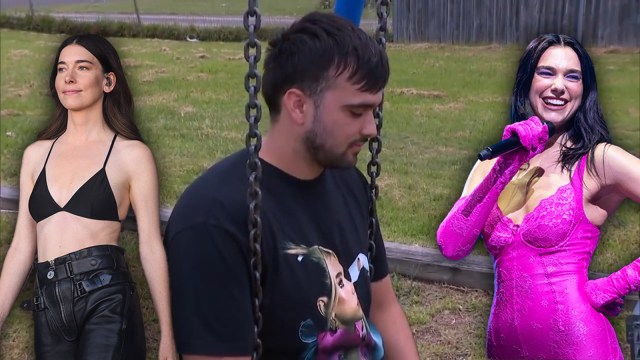 One Dua Lipa fan managed to tweet their way onto national Australian news, but unfortunately for the journalists involved, it turns out they were trolling.

As Sydney residents descended on Sydney Olympic Park in order to see Dua Lipa in concert earlier this week, many attendees had difficulties gaining entry because of technical issues with the ticket provider, Ticketek. This prompted one disgruntled fan to tweet, “thanks a lot. My boyfriend just dumped me because I wasn’t able to get us into the Dua concert”.

A journalist for 7 News, one of the country’s leading news networks, spotted the tweet the next morning and asked the user, a HAIM stan, if they were serious. Naturally, they decided to commit to the bit and said yes. This prompted 7 News to send a news crew to the tweeter’s home, interviewing him about his devastating breakup in the Dua Lipa queue.

The highlight of the segment is undoubtedly the fake name he provided, “Andrew Haim”, and the shot of him sitting on a swing set looking dejected.

Unfortunately for 7 News, Andrew was indeed trolling, and if the fake name wasn’t enough of a giveaway, tweets posted by him and his friends, including his boyfriend, after the segment aired confirmed as much. These included GIFs of the iconic swing set shot as well as a tweet from Andrew’s boyfriend that said, “JUST GOT BROKEN UP WITH ON NATIONAL TV 😭”.

7 News had the segment available on their website until earlier Thursday night, when an article that was originally about the heartbreak was amended to remove any mention of Andrew. Perhaps not coincidentally, this change took place only after this very writer — hi! — reporter wrote about the prank for her newsletter.

After reaching out to Andrew to ask if he was surprised by how seriously 7 News took him, he told We Got This Covered, “Yes but no at the same time.

“I also think we live in such a negative world where people take everything too seriously, which is what made me go through with this to be honest.”

Talk about trolling for a cause.