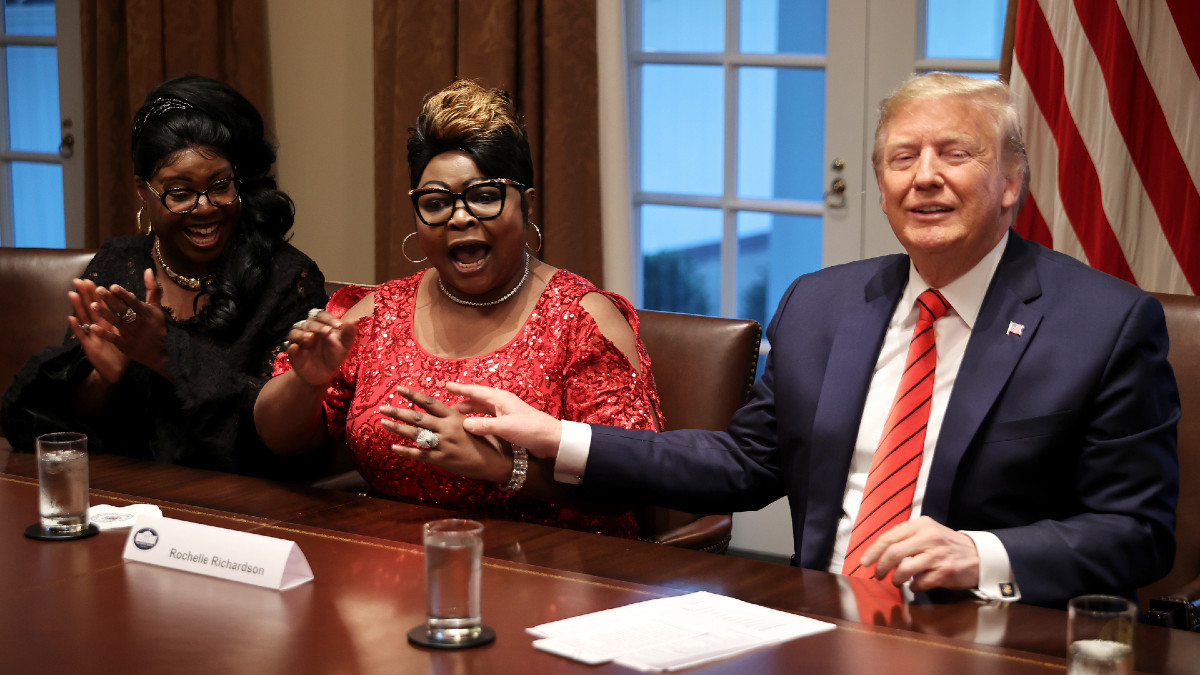 Donald Trump attended the funeral of Lynette “Diamond” Hardaway in North Carolina over the weekend, who passed away on Jan. 8 from unknown causes. Hardaway, along with her sister, Rochelle “Silk” Richardson, were two of Trump’s most vocal supporters, stumping for the former president throughout his 2016 campaign and beyond.

But unfortunately, due to either a momentary brain fart or just a complete lack of gratitude and compassion, Trump seemed to have forgotten who the living member of the duo, commonly known as Diamond and Silk, was while giving her sister’s eulogy. The omission was particularly egregious, as Richardson had just glowed about how Trump had made the two of them feel like immediate family.

“The world has lost one of its brightest stars,” Trump told the crowd gathered to remember Hardaway on Saturday. “But I see that we have another star who was equal to, but she stepped up and she is different. I’m serious, I thought I knew them both — I didn’t. I knew Diamond, but I didn’t know Silk at all. I just learned about Silk. You’re fantastic, you’re going to carry on beyond — beyond anybody’s wildest imaginations.”

At other points during the eulogy, Trump found yet another way to make the funeral all about himself by complaining about the time commitment.

“You know, they told me, just give me a little time. I’ve got a lot of people waiting for me back in a place called Palm Beach, Florida,” he continued. “They said, ‘Give me a little time. What do you think it’ll take?’ ‘About 15 – 20 minutes, in and out.’ I said, ‘Well it could take longer.’ This is a little longer than 15 minutes, right?”

While discussing Trump’s latest in a long string of faux pas, the panel on MSNBC’s Morning Joe could barely contain their amusement, leading political commentator Charlie Sykes to use some colorful language to sum up his feelings.

“Just beyond bizarre, beyond rude, beyond anything that anyone would see in normal, polite, let me say decent society, and this is a guy that a lot of people want to be the next president of the United States again, and so on brand for him, too,” Sykes said. “Look, this is what happens when you have a narcissistic sociopath give a homily at a funeral. It won’t go well.”

As news of the apparent slight began making its way around Twitter, others lambasted Trump for claiming that he didn’t know who Silk was.

At any rate, despite not knowing who Silk was, Trump was the first to announce the news of Hardaway’s passing on Truth Social.

“Really bad news for Republicans and frankly, ALL Americans. Our beautiful Diamond, of Diamond and Silk, has just passed away at her home in the State she loved so much, North Carolina,” he wrote in a Jan. 9 post. “Silk was with her all the way, and at her passing. There was no better TEAM anywhere, or at any time! Diamond’s death was totally unexpected, probably her big and precious HEART just plain gave out. Rest In Peace our Magnificent Diamond, you will be greatly missed!”

Hardaway and Richardson once regularly appeared as talking heads on Fox News and were even eventually given their own Fox Nation streaming show in November 2018. However, the pair were later terminated from Fox News in April 2020 for questioning the legitimacy of COVID-19 data.