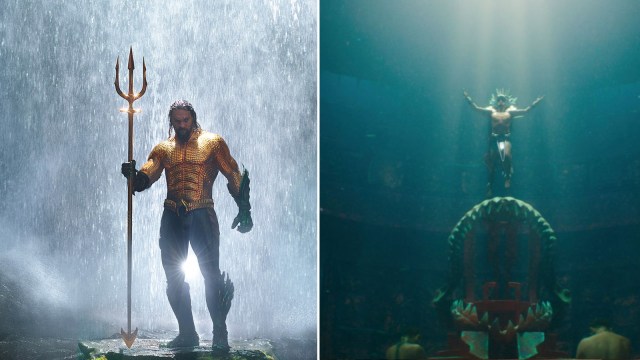 Of course, with Namor raging war in Black Panther: Wakanda Forever, there had to be a burning debate about how the mutant measures up in comparison to DCU’s Aquaman. Both rule the sea, but who does it better?

Let’s compare the history of the two superpowered beings, shall we?

In the comics, Namor’s mother was a princess from the ancient city of Atlantis, a lost city that historians have been looking for since Plato made it up a long time ago. So, in addition to being super strong and having the ability to fly, Namor is also royalty, which means he has an army of loyal soldiers ready to strike at his command. Though he doesn’t really need them, not when he has the superstrength to beat even the most skilled UFC fighter into a pulp just for thinking about tangling with him. Wakanda Forever has only given us a fleeting taste of the mutant’s limitless capabilities.

Aquaman is younger than Namor and is the DC answer to the antihero. He began as a weak and timid creature but grew to be taken more seriously. Especially in the most recent years when Jason Mamoa stepped into the role and showed the world what Aquaman was really about. The main difference between the two would be that Aquaman is an actual hero and Namor isn’t exactly inclined to upgrade his current stance as an anti-hero.

When it comes to the fans though, a battle is raging on Twitter that has followers of the MCU and the DC character clamoring for supremacy. Some have pointed out how Namor’s weakness of needing water to recharge can prove to be a hurdle that Aquaman will never face.

Even though 71 percent of the earth’s surface is covered by water, most of the action in the superhero realm takes place on land or in the air. Aquaman does have the advantage as far as walking on dry land is concerned.

A fan that takes no sides as this translates for non-Spanish speaking fans, “WORTHY OF ROYALTY! Actor #TenochHuerta talked about the comparisons between his character from #Namor and #Aquaman from #JasonMomoa. The Mexican said that it is an honor to be compared to him and highlighted the beauty of the #DC actor.”

Aquaman has a movie. Why doesn’t Namor? He is quite dominant in Wakanda Forever and he could possibly be the main character one day himself. Why not? And then, let the imagination rule. Let Namor meet Aquaman as if they never met each other swimming around in Atlantis. Or even if there are multiple universes and somehow they collide. This could be epic.

The debate can get quite vicious, as the characters already are. If Death Battle! is to be taken seriously, then Aquaman wins the fight and Namor is no more. However, Death Battle! is a comedy show and this is real stuff. Namor has some skills Aquaman hasn’t even thought of yet. Does Aquaman have hydrokinesis? See the point?

Then, there are fans seeing right through everything. Having a debate about Namor and Aquaman somehow takes away from the ticket sales of Black Adam. There might not actually be a correlation. But this fan seems to think so.

What a slam? One fan thinks that Namor has championed the cause so much that Aquaman quit his job. Wow! Instead of fighting battles in the water, he’s serving water to passengers on Spirit Airlines.

There will always be diehard fans on both sides. When a fan points out the specifics that Namor is vulnerable on land where Aquaman has a clear advantage, that’s putting it in King Nerd language that can be debated for years. Imagine Sheldon, Leonard, Wolowitz, and Raj debating that in the living room when Penny, Amy, and Bernadette walk in with Chinese.

It’s reminiscent of the debate about Superman versus Batman. It seems crazy that a man with invented gadgets in a suit can beat a man who is faster than a speeding bullet, more powerful than a locomotive, and able to leap tall buildings in a single bound! And yet, it happened. Will anyone ever make a valid point that ends the debate forever? Or a movie, please!