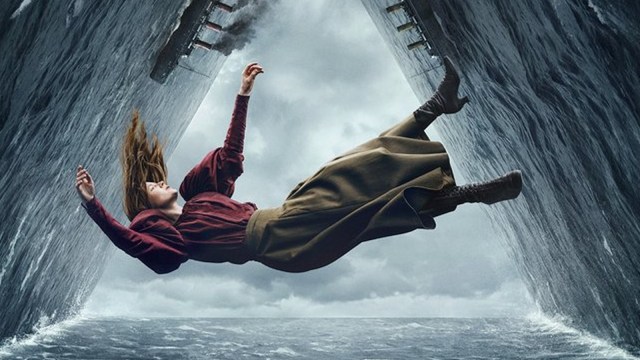 Netflix’s 1899 had plenty of twists and turns throughout its complex season one journey, but rest assured, all will be answered — or at least theorized about.

The series is a historical sci-fi mystery about a woman named Maura Franklin (Emily Beecham) sailing via the Kerberos steamboat from London to New York City filled with passengers from all over the world (and their own secrets). Before this, Maura’s father kept her in a mental facility, but she broke free. Her brother Ciaran has gone missing and Maura made it her mission to discover where he went. She believes that he could have been aboard the Prometheus ship, which has been missing for four months, but when they find the steamboat and take a look around, they find a supernatural event that makes matters more confusing.

When the Kerberos ship gets a message from the Prometheus ship, the passengers are divided about what should be done. Maura is one of the people in favor investigating the lost ship and she travels with a team to the location. Captain Eyk (Andreas Pietschmann) is part of the search party, but what they find isn’t Maura’s brother or dead passengers, it’s a young boy holding a small pyramid and hiding away in a cabinet. They’re shocked, but they take the boy back to their ship and Maura looks after him. She tries getting answers out of him, but the boy doesn’t talk much. It’s also revealed that Maura lost her child during childbirth and she cannot have any more children.

Strange things start happening aboard the Kerberos after they return from the Prometheus. Eyk starts seeing his family members who died in a fire and he begins losing his mind until Maura is able to ground him again. Other characters start experiencing flashbacks relating to their secrets and traumas, and a dense fog rolls in that prevents them from leaving, creating further strife among those aboard the Kerberos. Maura meets her neighbor (Aneurin Barnard), a man in a black coat, and she notes how familiar he looks, but she can’t quite place him. He does, however, have some connection to the boy.

Maura and Eyk return to the Prometheus and find a shaft on the floor with the symbol of a triangle with a line through it. Eyk says that a few months ago, a fleet of three ships was sold to a British investor, Henry Singleton (Anton Lesser). The ships went to the dry dock for three months, where they put in a new communication system and refurbished everything. That symbol is the ship company symbol. These trapdoors end up leading to alternate places — the memories of other people within the ship.

Who are these people?

The truth comes out and all of this revolves around Maura. The boy that was found on the Prometheus is her son Elliot and her neighbor is actually her husband Daniel. They’ve been trying to get her to remember her past because all of this is a simulation constructed to keep her in a perpetual world. Her father is Henry Singleton, and he’s at first believed to be the cause behind all of the weirdness. He’s been trying to get ahold of the pyramid object to reset the simulation, and Maura’s family has been keeping it away from him.

Henry captures Elliot and injects a syringe with white liquid that allows him to remember his past. He remembers himself being tied to a chair as Maura says that she has to keep him from dying. His father Daniel pushes against this, telling her that it’s pointless, but she goes ahead with it anyway and injects him with a black liquid. Elliot has been trapped in this memory because his mother wants to keep him alive.

Daniel saves the day and the mind-boggling ending

Daniel has been in the engine room, manipulating the code to change the simulation and a black plague is spreading all over the ship. The dead loved ones of the passengers are resurrected and they help them find their way out of their traumatic memories. Maura and Eyk look for Elliot and use a trap door and enter one of Daniel’s memories. They break through the walls and find Henry’s building, but once they go in, they’re stopped by the first mate. He demands the pyramid object that Elliot had given to his mother, but once the first mate has it, he uses a handheld device to kill Eyk.

Maura goes into the room with her father and son and hands Henry the pyramid and the key to it, but when he uses it, it doesn’t reset the program. Instead, the simulation breaks down and Maura arrives back outside. She sees the gravesite with a light shining on it and she climbs down inside it where a colorful room awaits. Daniel arrives shortly thereafter and tells her that this is the first simulation they created together.

Daniel reveals that it’s not her father that’s responsible, he’s a prisoner like everyone else. It’s her brother, Ciaran, who’s been controlling everything. He says that he switched the exit code for the pyramid and the key, and the new code went into a pyramid toy and Maura’s wedding ring. They say their goodbyes and Maura puts her ring into the pyramid toy, taking her out of the program.

Maura wakes up aboard a futuristic-looking spaceship. She walks around the area and sees the other passengers who were aboard the Kerberos. She reads on a screen that it’s the year 2099 and this operation is called Project Prometheus. This is a survival mission and there are coordinates to another location. Maura’s next mission is to find her brother and stop this game he’s been playing with their lives.

There are numerous theories one can consider after this jaw-dropping ending. Who is Ciaran’s brother? Why is he doing this? Those questions are at the top of that list. His vengeance against his sister makes sense, but who are these other people involved in this project? Are they random victims or do they have a greater purpose?

The passengers had a lot in common despite their different cultural backgrounds. Many of them had terrible secrets and possessed a darker side, which could mean that these passengers are actually criminals. It would be hard to believe that Ciaran would be allowed to take so many innocent people and put them into a simulation unless they agreed to it, or if they didn’t have a choice. Either that or Ciaran is more powerful than he seems. He could have some kind of presidential power that allows him to bypass any such barriers.

Another question is whether Daniel and Elliot are actually alive in reality or just a simulation. Aboard the spaceship, neither of them is around, which could mean they’re dead. Another possibility is that Elliot is dead since Maura said she lost a child, and this was just a digital imprint of the boy. In her old life, she’d been trying to keep Elliot alive via the simulation, and perhaps during her time in the simulation, Elliot finally succumbed.

There are so many questions that still need answering, and considering 1899 has been another success for Netflix, we’re hoping season two will be on the way.