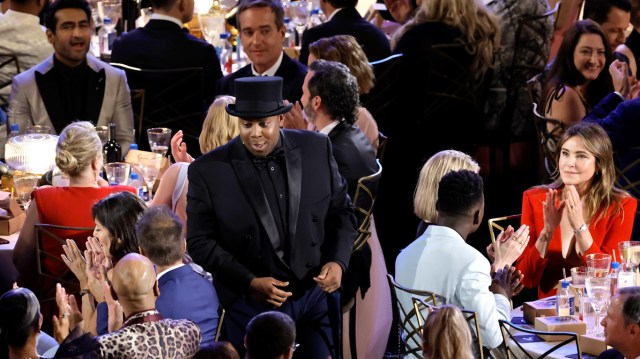 Now that the Emmys have come and gone, its contributions to history can be reckoned: on the positive side of the ledger, Zendaya triumphed, becoming the first Black woman to win Outstanding Lead Actress in a Drama Series category twice, and is also the youngest ever actress to have won two Emmys in any category. But the age old sport of ratings comparison to previous shows has only just begun, and the news on that front, however, is decidedly not good. The show hit a new low in the ratings, as viewership declined 25 percent from last year’s ceremony.

The 74th annual Emmy Awards notched a 1.0 rating in the all important 18-49 demographic, which is the lowest ever in the broadcast’s history. The second lowest ever viewership was during the 2020 show at 1.3. Last year, the show hit 1.9. In terms of viewers, this year pulled in about 5.9 million, which was markedly lower than last year’s number of 7.9 million.

During the 2020 ceremony, about 6.37 million viewers tuned in. The lower viewership numbers weren’t even helped by NBC’s decision to stream the show on Peacock this year. Part of the reason for the low viewership could be attributed to the debut of the flagship NFL show Monday Night Football, which debuted on Monday as well.

The numbers aren’t completely surprising as viewership for award shows, including the Oscars, have been steadily declining over the years. To illustrate how much of a fall the Emmys have seen, four years ago the 70th Primetime Emmy Awards saw an audience of more than 10 million. Those numbers seem impossible in the current fractured media landscape.

Another issue affecting ratings is the fact that none of the networks have any real shows that people are watching en masse except Abbott Elementary over on ABC. In fact, the whole ceremony is basically a commercial for streaming networks like HBO, Netflix and Hulu. Sounds like there’s going to be some changes to the ceremony next year as the show continues to struggle for relevance.