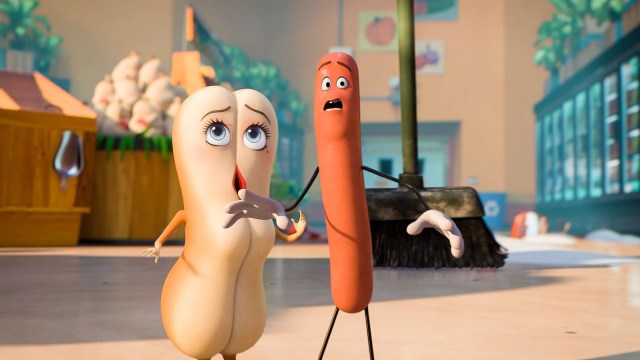 Back in 2016, Seth Rogen and his writing partner Evan Goldberg released a very raunchy animated movie about talking food called Sausage Party. It was hilariously irreverent and intentionally gratuitous. Now it’s coming back.

Amazon has ordered eight episodes of a series called Sausage Party: Foodtopia based on the movie with original cast members Kristen Wiig, Michael Cera, David Krumholtz, Rogen, and Edward Norton are all returning to voice characters, according to The Hollywood Reporter.

There’s also going to be some new voices as well. Those include Sam Richardson, Will Forte, and Yassir Lester. Rogen and Goldberg said they were pumped about the idea of bringing the show to the silver screen.

“Film used to be the superior art form to television, and we humbly reached the pinnacle of what can be achieved with film in our remarkable opus, Sausage Party. But now that film is completely dead and TV is the forever-king of entertainment, we’ve decided to continue the epic adventures of our culinary crew in the soon-to-be-legendary televised masterpiece Sausage Party: Foodtopia. It’s got all the heart, double the puns and triple the food-on-food sex. In other words, it’s exactly what the world needs right now.”

Vernon Sanders, the head of global television at Amazon Studios, praised the original movie as an “incredibly hilarious, outrageous, one-of-a-kind entry into the world of animation.”

“We are thrilled to collaborate again with Seth, Evan and their team at Point Grey, as well as our partners at Annapurna Television and Sony Pictures Television, to offer a new look into this world that will be brought to life so vividly for our global Prime Video customers.”

There’s also the possibility that other cast members could be added in the future, including other actors who were in the original like Salma Hayek, Jonah Hill, and Danny McBride. There’s a good chance James Franco will not be though, as he and Rogen had a falling out.

We don’t have story details or a release date just yet but we’ll keep you updated when we hear anything.