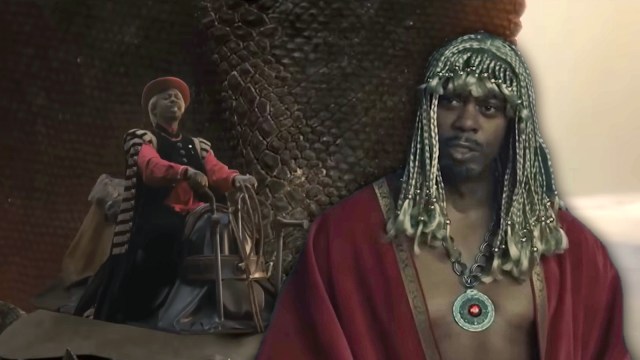 If House of the Dragon succeeded in sucking you back into the world of Westeros after the disappointment of Game of Thrones’ conclusion, then just like the rest of us, you’re probably already jonesing for season two – which at the time of writing, seems like a lifetime away.

Well, there’s good news for you…sort of. It turns out that Dave Chappelle is something of a Geroge R.R. Martin fan himself, so he resurrected a few of his fan-favorite Chappelle Show characters to offer a sneak peek at what’s to come for the series. Or at least, a thoroughly entertaining parody of it.

In his monologue preceding the skit, Dave Chappelle praises House of the Dragon for its diversity and inclusion of Black characters in the show. However, he found their blonde hair and ‘old-timey’ accents to be jarring – establishing the premise for Silky Johnson, Rick James, and Tyrone Biggums to help set the stage for the Dance of the Dragons.

What can only be described as hilarity ensues – with Rhaenyra and Daemon (portrayed by Chloe Fineman and Michael Longman, respectively) plotting for the upcoming war with Kings Landing, naturally making incest jokes along the way.

Kenan Thomspon enters the scene as Lord Corlys Velaryon, who proceeds to allude to him and his people’s ‘comfort’ with being on ships.

In Chappelle’s vision, apparently, King Viserys Targaryen (played by James Austin Johnson) survived his battle with leprosy, although only as comic relief as his limbs intermittently fall off over the course of the skit. Oh, and Ice-T also shows up as “light-skinned Larry Targaryen.”

The spoof rounds out with Chappelle’s characters hilariously and cheaply green-screened onto the back of flying dragons, culminating in the crew somehow getting pulled over by the police, because of course they do.

As fantastic as this sketch turned out to be for Chappelle Show and House of the Dragon fans, Chappelle’s return to Saturday Night Live was a particularly turbulent event, with the show’s writers reportedly boycotting this week’s episode due to the comedians previous divisive remarks during standup sets about the transgender community.