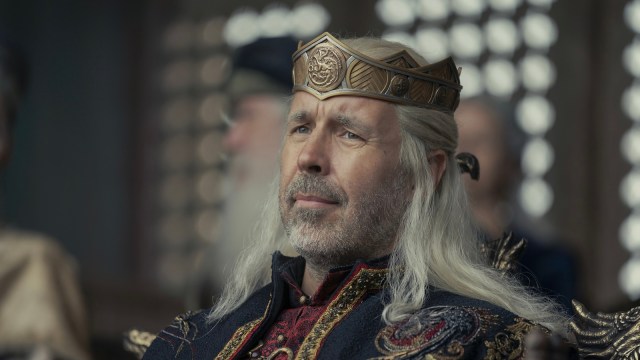 House of the Dragon star Paddy Considine is appreciative that he was given a chance to play such a monumental role. He plays King Viserys in the prequel series, the king of King’s Landing nearly 200 years before Game of Thrones, and he’s not taking it for granted.

In an interview with Collider, Considine shared that he didn’t consider himself the likely actor for such a prestigious role and praises the show for “taking a chance” on him.

“Yeah, but props to them because that’s them thinking outside the box. There are so many people out there that wouldn’t ever consider me for the role of a king, so power to them for thinking outside the norm and thinking that I’d be a good choice. Obviously, Miguel [Sapochnik] saw something in work that I’d done previously, and thought I had the qualities to take on this part. Good on him for taking a chance on me. That’s a really big thing, because people don’t. I remember being offered a series, years ago in England, and the director I’d worked with previously said, “I just don’t think I can see him as a policeman.” I was like, ‘I’m never going to get the chance, if that’s the case. What do you want me to play? Hoodlums off council estates for the rest of my life? What am I going to do? How am I ever going to get the chance to play a variety of characters, if that’s your attitude?’ So, I’m really grateful to them.”

In the series, King Viserys has the difficult responsibility of choosing who will be the new heir. A child is on the way, who he believes will be a son, but both his brother Daemon Targaryen (Matt Smith) and his daughter Rhaenyra Targaryen (Milly Alcock) have to be considered.

Considine has played in the comedies Hot Fuzz and The World’s End, and more recently HBO’s The Third Day limited series starring Jude Law, and all they’ve been a far cry from anything kingly. Sapochnik directed some of the most memorable Game of Thrones episodes, however, and he clearly knows what he’s doing.

Considine also spoke about what it was like when he got the role and whether he was intrigued or terrified because of the expectations that came along with it. “It was a bit of both,” said Considine. “It’s not that you don’t want to take on the role, but there’s a big chance that you’ll lose your anonymity. I’m relatively on unscathed. I move around very stealthily, and I don’t get recognized. I don’t get any of that kind of stuff. My fear was, ‘What if that changes?’ I live a pretty quiet existence, as much as I can. But you equally can’t go into something like this that’s already established and be surprised that there will be global interest in the show.”

To say that GOT was a big deal would be an underestimate. It’s one of the biggest shows of all time and has launched the careers of many actors on the world stage. Playing such a major role would absolutely change things, but Considine has learned to reconcile with that and focused on doing King Viserys justice.

Showrunner Ryan Condal has commented on King Viserys’ complicated sibling dynamic with Daemon Targaryen. The two are opposites, and yet their relationship avoids becoming too obvious because they care about one another.