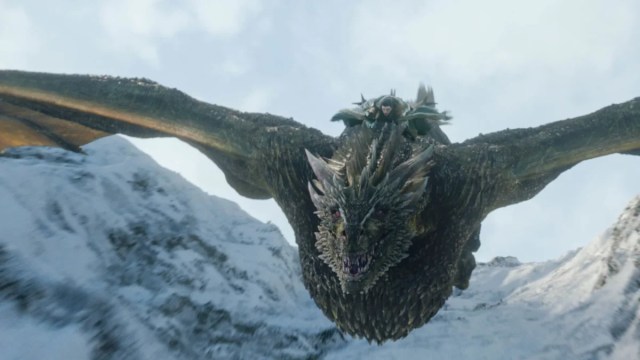 We know there’s a House of the Dragon, but what about a Nursing Home of the Dragon? How old do dragons in Westeros get, anyway? While you may not have pondered these questions, now that they’re in your mind they’ll be hard to evict. Thankfully, we have the answers that’ll free you of this unusual mental burden. Here’s the lifespan of Game of Thrones dragons.

The life expectancy of dragons

“A dragon’s natural span of days is many times as long as a man’s,” says Jorah in A Storm of Swords, “or so the songs would have us believe.” He mentions “wise old dragons living a thousand years,” but dismisses that as a tale. Jorah goes on to say that dragons rarely reach their full lifespan because, especially in House Targaryen, they were bred for war and therefore died in war. For instance, in the TV series, Daenerys’ dragons die at ages six and seven. Drogon, the last living dragon in the GoT universe, is only seven!

Considering that “a dragon never stops growing . . . so long as he has food and freedom,” as Barristan Selmy puts it, a hundreds-year-old Drogon will be massive.

So, although an average lifespan is not known, nor is a peak lifespan, GoT dragons can live much longer than humans and continuously grow until they die. Naturally, the largest dragon is also the longest-lived dragon. That distinction goes to an individual who lived long before, during, and long after House Targaryen conquered Westeros.

Balerion, otherwise known as the Black Dread, was roughly 200 years old when he died. “He was so large he could swallow an aurochs whole,” notes Selmy. At King’s Landing, the Targaryens built a castle to house Balerion and their other dragons, which they dubbed the Dragonpit. That’s where the record-breaking reptilian lived out his final years. Balerion’s the only dragon known to have died of old age.