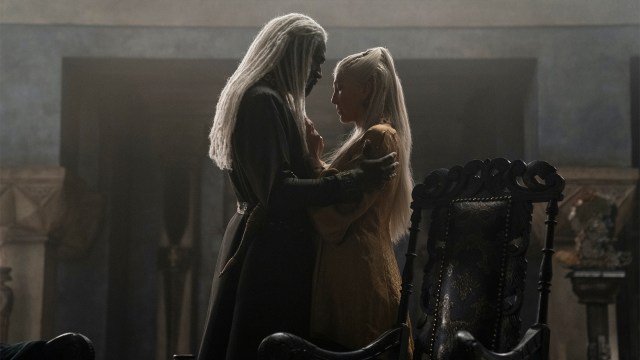 While House of the Dragon fans like watching a good power struggle, they absolutely love the cheeky banter between Rhaenys and Corlys Velaryon.

Though Rhaenys Targaryen (Eve Best) lost her birthright due to her sex, she gained a wonderfully cynical worldview shared by her shrewd and sardonic husband Corlys, Master of Driftmark (Steve Toussaint). Redditor Yashtiwariart posted a photo of the gilt-maned couple with the caption “Rhaenys and Corlys of House Sassy” in the r/HouseOfTheDragon subreddit.

Rhaenys was the sole heir of Aemon Targaryen, Prince of Dragonstone. Her claim to the Iron Throne was rejected by The Great Council, who chose her cousin, Prince Viserys Targaryen. She married Corlys, the wealthiest man in Westeros, the Master of Driftmark and Lord of the Tides.

Fans praised the work of casting director Kate Rhodes James. The author of the original post was jubilant about the wonderful sense of fun between the spouses and the delectable sass they exude.

Alaskas_hairbow was enamored with the energy of Rhaenys and Corlys, who they described as “the power couple of Westeros.”

Mellowenglishgal was also impressed by the Velaryons ability to emanate an air of pure sovereignty, which they neatly summed up as, “We are totally superior to you in every way despite that crown on your head.”

Spirited-Accident is looking forward to seeing more of the Sea Snake, and The Queen Who Never Was.

The first episode of the Game of Thrones spin-off already saw fans captivated by the engaging chemistry between the pair, and it’s going to be exciting to see what intrigues lies ahead.