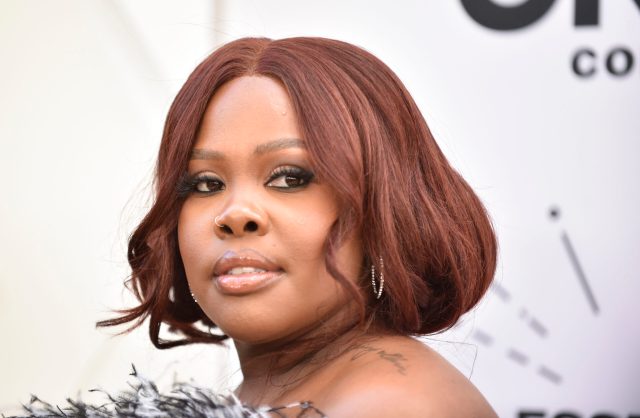 Fans of The Masked Singer seem to have figured out who the person behind the Harp mask is and they’re shooting for Glee‘s Amber Riley.

If you’ve spent the 2010s watching Glee, chances are you can recognize any voice from the show with your eyes closed. That doesn’t seem to be the case for the The Masked Singer judges panel, but the audience at home has enough Glee connoisseurs to spot Amber Riley’s voice from a mile away.

The Harp’s performance of Whitney Houston’s “I Have Nothing” on Wednesday’s episode appears to have settled the score on the identity of the woman behind the powerful vocals. If that unmistakable voice wasn’t enough, Riley also seems to go well with every clue given by the Harp on the show so far.

What are the Harp’s clues, and how do they fit Amber Riley?

In her first clue package, the Harp talks about auditioning for the “biggest show in the world” when she was younger, but being turned down. Before getting Glee, when she was 17 years old, Riley auditioned for American Idol, but was rejected.

The Harp then says she wound up getting a life-changing opportunity that would turn her into “an idol for anyone that felt like an outsider.” This quite clearly refers to Glee. The show’s whole brand was being a representative for the unpopular kids at school, producing original songs like “Loser Like Me,” and displaying its cast members making an L shape with their hands in its signature promotional posters.

After Glee, Riley went on to make a name for herself in musical theater. The binoculars, call sheet, bouquets of roses, and the witch hat in her clue package could all be tied back to her live stage performances. In 2015, the actress-singer was Addaperle, the Good Witch of the North, in NBC’s live performance of The Wiz. One year later, she took on the role of Effie White in West End’s production of Dreamgirls.

There are also 3D glasses in the Harp’s clues, which could be hinting at 2011’s Glee: The 3D Concert Movie, as well as scenes of her dancing, that would fit her winning stint on Dancing with the Stars in 2013. She later also comments on being “competitive,” seeing as The Masked Singer is the second reality competition series she has participated in.

After her first performance on the show, host Nick Cannon asked the Harp what accomplishment she was most proud of. Her answer? “The award I won for my acting. No. Actually, the one I won for my singing. Wait, no! It’s probably the one for my comedy because I got to share that with my besties.”

Riley won a Screen Actors Guild Award as part of the cast of Glee for Outstanding Performance by an Ensemble in a Comedy Series in 2010. In 2017, she won big for her performance in Dreamgirls, including the Laurence Olivier Award for Best Actress in a Musical as well as the Evening Standard Theatre Award for Best Musical Performance.

The comedy awards could also be Glee‘s wins for Best Television Series–Musical or Comedy at the Golden Globes in both 2010 and 2011, among others. It could also refer to comedy series A Black Lady Sketch Show, in which Riley has played different characters, a series that has won a Television Critics Association Award.

In her second clue package, the Harp showed a CD called “Night Night.” Like The Masked Singer judge Nicole Scherzinger pointed out, this is likely a reference to Riley’s role in Dreamgirls.

On the Harp’s Vegas Night Clue, a ball that Scherzinger aptly caught said “collaborated” on it. The Pussycat Dolls singer explained that she and Riley collaborated on Straight Outta Oz, an album by Todrick Hall.

Additionally, both songs the Harp has performed on The Masked Singer were previously performed on Riley’s show, Glee. Coincidentally, her good friend on and off-screen, Chris Colfer, was a featured singer on Glee‘s covers of both “Perfect” and “I Have Nothing.”

Although the judges have given other guesses as to whom this masked singer could be, including Queen Latifah, Jordin Sparks, Fantasia Barrino, Jennifer Hudson, Ashanti, and Yvette Nicole Brown, anyone familiar with Riley’s work can see right through that harp costume.

Regardless, the Harp seems to be one of the favorites to win the show. She was once again crowned the queen of The Masked Singer in the latest episode after facing off against the Panther in an electrifying performance of Steppenwolf’s “Born To Be Wild.”

Watch The Masked Singer, Wednesdays on FOX, to find out if the Harp is indeed Glee‘s Amber Riley.