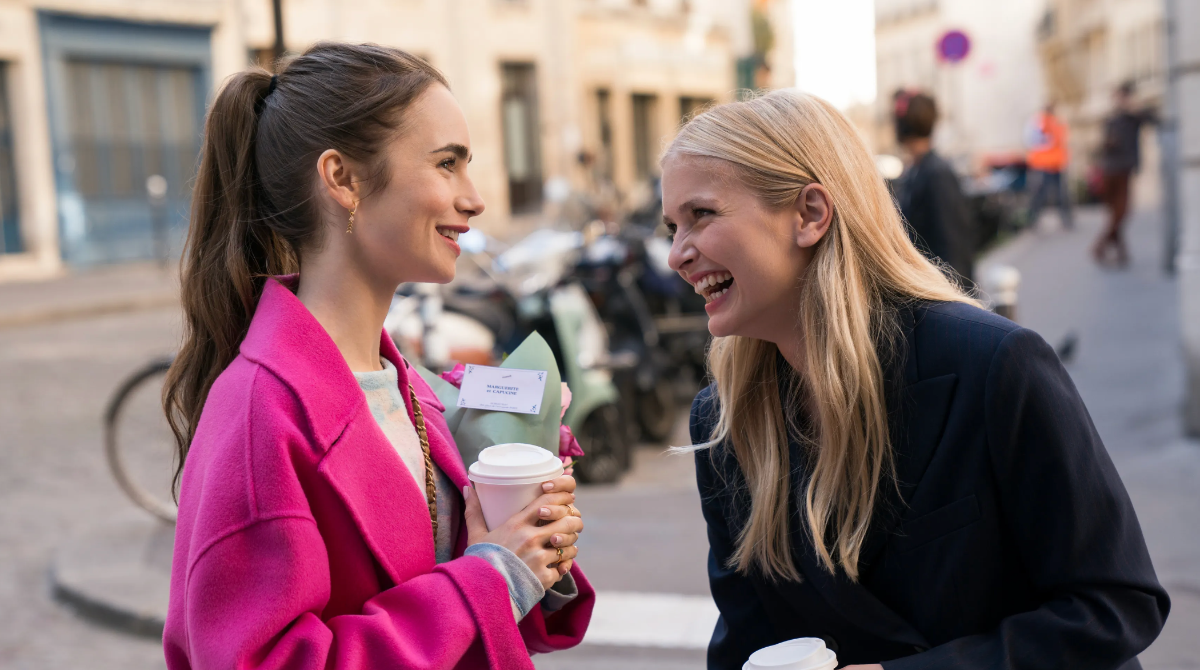 Season three of Netflix’s popular show Emily in Paris is finally here, whether you like it or not. In the newest season, we get updates on Emily’s relationships with current flame Alfie and her ex Gabriel. As par for the course, we also get some adorably campy fashion to ogle at as we try to keep up with the convoluted romance drama.

While we all know the show is about the titular Emily and her adventures in the city of love, we can’t help but be enchanted by Camille. Camille was one of the Emily’s first friends in Paris and the two have had a complicated friendship complete with a love triangle and an accidental kiss. Through it all, Camille seems genuinely sweet and we just have to root for her. Things have gotten way more complicated by the end of season three with Gabriel revealing to Emily that Camille is pregnant with their child.

Fans of the show have wondered about Camille’s sexual orientation ever since she unapologetically kissed Emily on the lips after meeting her. Was that all baseless speculation or is Camille gay?

Is Camille gay in ‘Emily in Paris?’

When season two ended, Camille had rekindled her relationship with Gabriel. During the latest season, they are still together but their relationship is challenged when Camille gets a crush on Greek artist Sofia. The two meet when Camille’s art gallery hosts Sofia’s art installation. Soon after meeting, they share a kiss and Camille travels to Greece to have a full-fledged affair with the artist behind Gabriel’s back. It’s pretty clear Camille has feelings for Sofia but does she identify as gay?

While the show doesn’t get into labels, Camille Razat, who plays Camille on the show, confirmed Camille identifies as bisexual. In an interview with Screen Rant, Razat states she believes representation is important and that she loved her character’s storyline this season.

“I was very happy about that storyline. Actually, that was something that I talked about with Darren [Star]. I told him about her having an affair but with a girl because I think for so many reasons, like you said, it was a representation that I was very happy to do. I was very happy to send that message that you can be bisexual and that you can love two people at the same time, too, so, for so many reasons, I was so happy with that storyline. And Melia Kreiling is an amazing actress. And it was a pleasure for me to do those scenes with her.”

We’re anticipating the affair will be a big part of Camille’s storyline in season four. Will Camille stay in Paris with Gabriel or will she go back to Greece to be with Sofia? The baby complicates matters even more and while we really can’t predict what will happen, we know it’s sure to be dramatic.